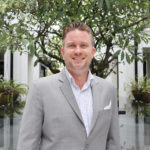 Having joined Accor in 2010 at Sydney Olympic Park, home to the first Pullman address in Australia, Jon took on various operational roles across the country before relocating to Thailand in 2015. Since then, Jon has held leadership positions in Phuket, Koh Samui and Bangkok.

In his spare time, Jon is a Board member for the Thailand chapter of the Australian Chamber of Commerce and is actively involved in community initiatives across the Kingdom, heading the chamber’s CSR committee.

Jon also supports three children at Yaowawit School – Kapong, in the Phang Nga Province of southern Thailand, as part of a community sponsorship programme, along with his rescue dog, Keo, who he met during the pandemic in Koh Samui.