The Nong Khai region of Thailand is located close to the border with Laos and a short distance from the capital Vientiane. If you are looking for somewhere memorable to visit that showcases some of the best Buddhist aspects of Thailand, a trip to the Sala Keo Kou Park in Nong Khai is a perfect choice. The park and temple is sometimes referred to as Wak Khaek, and is home to a number of large stone sculptures that are inspired by legends of Thailand’s Buddhist roots.

Located within close proximity to the border and the historical Mekong River, the park has become a popular place with tourists over the past ten years.

Created by the Buddhist architect Sulilat, the park was originally constructed in 1978 and displays a memorable style using ancient Buddhist symbols. It is very similar to the Buddha Park located on the opposite side of the Mekong in Laos, but is more flamboyant and monumental in scope.

The concrete sculptures are absolutely awesome, some reaching up to 25 meters in height. Check out the sculpture that is a depiction of Buddha meditating under the protection of Naga, the seven headed serpent God. It is particularly emotive in its grandeur.

One of the most famous and certainly the most intriguing part of the park is the impressive Sala Keo Kou Wheel of Life. This is represented by a grouping of sculptures in a circle that mimic the karmic way of the universe. The cycle represents the path from birth to death, or as we in the West like to call it, cradle to grave. The cycle finishes with a man becoming enlightened and reaching the position next to Buddha.

Another popular landmark at the park is the Sala Keo Kou pavilion, a three-story concrete structure that looks very much like a Muslim mosque. The building was constructed after Sulilat passed away and the third floor actually holds his ashes, a replica of his mummified body, and a load of artifacts.

The park hosts lots of visitors, especially at weekends, as locals flock to see the sculptures. One of the great things about the park is that it’s only 20 THB to get in, which is a tremendous value for money.

Outside the park you will find an area with lots of souvenir stalls, food vendors and even lottery ticket sellers. The place has a nice feel of tranquilly and excitement. 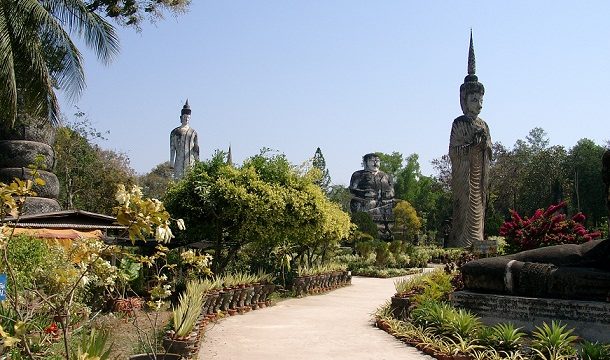