Nestled between its neighbouring provinces of Lampang, Uttaradit, Nan and Phayao, Phrae today still boasts among the country’s largest teak forest reserves.It is one of the 55 secondary destinations being promoted around the kingdom in a complementary fashion with key destinations, in the ‘Amazing Thailand Go Local’ campaign.

The old town area of the namesake provincial seat is home to a number of historic buildings and locations that are a proud testimony to Phrae’s history. And with this section of town being reasonably compact and relatively traffic free, the area lends itself to leisurely exploration on foot for those who so desire although there are motorcycle taxis and samlos (three-wheeled taxis) readily available.

Among places to visit is Wongburi House, a splendid two-storey teak mansion that was built in Phrae’s teak heydays of the late 19th and early 20th centuries and which is today open to the public as a museum. On display through various rooms of the house are old documents and photos, antiques and other artefacts that paint an interesting picture of life in Phrae in the past.

The mansion itself, which is set amid picturesque gardens, boasts turn-of-the-century architecture that blends Thai and European influences. Its colonial style of high ceilings and wide balconies is reminiscent of other such mansions that can be found across Northern Thailand.

The nearby Khum Chao Luang Museum, built during the same period, likewise stands in proud testimony to the glory days of the area’s teak trade. The furniture, ornaments, household items and period photographs on show here provide further insight into a prominent part of the local history.

Among the various temples in Phrae, Wat Luang in the old town area is thought to be the most ancient with some saying it dates back to the 12th century while others put its origins in the 9thcentury. A few streets away is Wat Phong Sunan with its impressive reclining Buddha image and a 500-year-old seated image in the subduing Mara posture, as well as a striking chedi with gleaming white spires.

Also in the old town is Wat Phra Bat Ming Meuang, which includes on its premises a museum and an octagonal drum tower made of teak wood.

A couple of kilometres to the north is Wat Chom Sawan, this temple having been constructed by a group of migrant Tai Yai, or Shan, teak workers in the early 20th century. It’s considered one of the best temples of its kind still remaining in Thailand and features a main hall all in teak and raised on stilts with a three-tiered roof.

A few kilometres east of town, on a low hill, is a highly revered temple that locals say if you don’t visit you haven’t really been to Phrae. The main chedi at Wat Prathat Cho Hae is said to house relics of Lord Buddha, both hair and parts of his left elbow. The temple’s origins are thought to date back to the late 13th or early 14th centuries.

The village of Ban Thung Hong, situated a few kilometres from Phrae’s old town area, is renowned for its products made from Mo Hom, a local indigo-dyed cotton fabric. Traditionally the fabric was used for farmers’ pants and tunics yet today the village also offers a range of lovely handmade clothing.

Phae Mueang Phi Forest Park, a short drive outside of town, has been described as a geological curiosity. Some 2 million years of erosion has resulted in a landscape of intriguing red sandstone rock formations which, although only covering a small area, isn’t the kind of landscape you see every day.

Also known as the Forest City of Ghosts or Spirit Grove, this sacred forest park has a legend attached to it that tells of a woman who came across gold and silver deposits in the area and tried to take them home with her. This apparently offended the spirits there, and the woman became more and more lost and was only able to find her way home after she put the deposits back.

It can be said that wherever one’s travels take them in Thailand, they’ll always be delicious local cuisine that’s easy to find and remarkably inexpensive for the culinary quality that’s served up. In Phrae, one of the best spots for a variety of great snacks and meals is the weekly Saturday walking street market that comes to life on Khum Lue Road at Prathu Ma (the West Gate) in the old town area.

The market stalls selling a range of items from handicrafts to T-shirts to carved candles and what can be best described as a taste bud-tingling array of exotic food dishes, begin setting up as the sun starts to go down. The amazing aromas, the captivating sounds of tasty morsels on the sizzle, and the unmistakable clang of spatula upon wok creates the perfect setting in which to enjoy such delights as barbecued kebabs, spicy northern Thai-style sausages, grilled chicken and pork, fresh fruit, sticky rice, sweet desserts and more. 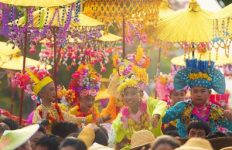 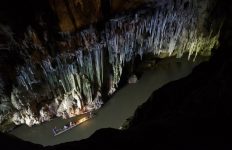