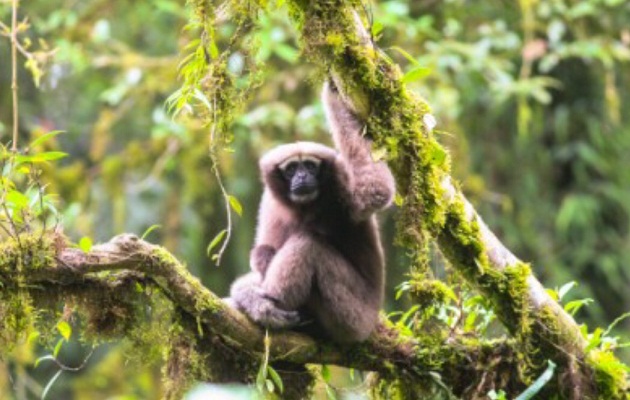 A bat which looks like singer/actor Lance Bass, a gibbon named for Luke Skywalker, and a toad which seems to have come from Lord of the Rings “Middle Earth,” are among 157 new species discovered in the Greater Mekong Region last year, according to a new report from the World Wildlife Fund.
Of the new mammals discovered, the Skywalker Hoolock Gibbon was first sighted in mid-2017 and named after the “Star Wars” character, to actor Mark Hamill’s delight. Already however, it is the 25th most endangered primate in the world and faces a “grave and imminent risk to its survival as (do) many other small ape species in southern China and Southeast Asia due to habitat loss and hunting,” according to the team which discovered it.
Three mammal, 23 fish, 14 amphibian, 26 reptile and 91 plant species were found in Cambodia, Laos, Myanmar, Thailand and Vietnam, in some of the region’s most impenetrable terrain, such as remote mountainous and dense jungle areas, as well as isolated rivers and grassland.
However, experts warned that many more undiscovered species will be lost due to deforestation, climate change, poaching and the illegal wildlife trade.
“There are many more species out there waiting to be discovered and tragically, many more that will be lost before that happens,” Stuart Chapman, WWF’s Asia-Pacific Regional Director for Conservation Impact, said in a statement. “It doesn’t have to be this way. Ensuring that large reserves are designated for wildlife, along with increased efforts to close illegal wildlife trade markets, will go a long way to conserving the extraordinary wildlife diversity in the Mekong region.”
Much of the wildlife described in the new report – New Species on the Block – is already at risk of population loss or even extinction.
This fragility ranges from bamboo, a variety with unique bulb-like features at its base, discovered in Cambodia’s fragrant Cardamom Mountains, vulnerable to clearing, to the new thismia herb from Laos, already endangered because its habitat has been leased out for limestone mining.
While Laos and Myanmar have tried to clamp down on the illegal wildlife trade, by increasing penalties and shutting down shops and markets, poachers can easily capture and transport animals across borders, particularly in places such as Mongla and Tachilek in Myanmar, said Lee Poston, spokesman for the WWF in the Greater Mekong area.
A bat whose hair bears a likeness to Lance Bass’ iconic frosted tips of the band *NSYNC, was discovered in the sub-Himalayan habitat of the Myanmar’s Hkakabo Razi forest.
Poston said snares fashioned from cheap bicycle cable are often used indiscriminately by poachers, both to catch bushmeat for local consumption and to capture endangered species such as leopards and tigers for the wildlife trade. While he praised the work of local rangers who track and survey the areas for traps, the sheer quantity make the task of removing them difficult.
Despite the challenges, Poston said the new report was a “testament to the resiliency of nature.”
“By highlighting these incredible discoveries by hundreds of the world’s scientists, we are sending a message that even though the threats are immense to wildlife in the Greater Mekong, there is still hope for the future, because so many amazing new species are being discovered all the time,” he said.
In a statement, Chapman said “there is blood, sweat and tears behind every new discovery. But it’s a race against time to announce a new discovery so steps can be taken to protect it before it’s too late.”
Written by : Andrew J Wood
Share
Facebook
Twitter
Pinterest
WhatsApp
Previous article
Experience the Ultimate Dining Pleasure! 2-Michelin Star French Chef Thierry Drapeau Visits VIE Hotel Bangkok during 30th January – 1st February 2019
Next article
The Taste Of Mouton Cadet