With the world of travel re-opening for many, new research reveals the world’s best (& worst) hotel chains, from Holiday Inn to the Four Seasons.<

The study by the travel experts at Bounce ranked the world’s most popular hotel chains on factors such as reviews, popularity, availability and annual revenues, to reveal the world’s most (& least) successful hotel chains.
You can view the full study here: https://usebounce.com/blog/hotel-chain-index
The Most Successful Hotel Chains in the World
The flagship brand of the Hilton Worldwide company, Hilton Hotels & Resorts is ranked as the best hotel chain in the world. With a total of 584 locations across 124 countries, there is no shortage of Hilton Hotels. The chain even hosts seven 5* hotels, including the breathtaking Hilton Luxor Resort & Spa in Egypt.
Ranking in second place is Holiday Inn. Founded in Memphis, the budget chain is one of the most widespread hotel brands in existence, operating in 1,190 locations in 54 countries across the globe.
Luxury hotel chain Four Seasons comes in third place. The hotel brand has 122 locations across 47 countries, with the Four Seasons Resort Maui recently serving as the filming location for HBO’s The White Lotus. The chain makes an estimated annual revenue of $2.1 billion.
The research also revealed the world’s least successful hotel chains:
Ranking as the worst hotel chain is Park Plaza Hotels & Resorts. With hotels in only 7 countries, the Park Plaza chain has limited availability. The chain also receives the lowest number of worldwide Google annual searches (155,400).
Further Study Insights:
[pro_ad_display_adzone id="915575"] 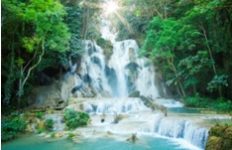