Magnolia Quality Development Corporation Limited (MQDC)—a company with proven excellence in investing in, developing, and managing highly-regarded residential and mixed-use projects including “THE FORESTIAS”—today sums up the success of the “Forest Rescue” campaign to save trees in and around Bangkok. Ten million Thais are now aware of the importance and value of nature and over 500 trees have been relocated to a 3-rai (4,800 sqm) area at THE FORESTIAS prepared for trees moved under the campaign. The replanted trees will provide a natural filter that consumes up to 700 kg of PM2.5 hazardous particulates each year.

Mr. Kittiphun Ouiyamaphun, MQDC Senior Vice President, said: “THE FORESTIAS, our flagship property project centered on a harmonious way of life with large and lush natural ecosystems for lifelong happiness of all residents under an ‘Imagine Happiness’ concept, has acted through our fruitful ‘Forest Rescue’ campaign to build awareness of nature and trees in urban contexts. In addition to knowledge-building, a specialized squad of arborists and experts named ‘Forest Rescue Team’ also explored the city to gather information, tend trees, or—if needed—move them from their original locations to a well-prepared sanctuary at THE FORESTIAS, where 3 rai (4,800 sqm) has been designated as an extensive natural ecosystem for the project.”

For the past six months, THE FORESTIAS by MQDC has informed consumers nationwide, with a focus on the 10 million Thais living and working in the capital, about the value and importance of natural ecosystems. An analysis of 500 trees secured by Forest Rescue Team has revealed that most are large trees including varieties of raintree, blackboard tree, framire, tamarind, and mango aged 5–10 years. These large trees, as well as trees in general, can return useful benefits whether directly or indirectly to other living beings in the ecosystem. The process of photosynthesis allows trees to absorb harmful gases—such as carbon monoxide, sulfur dioxide, and nitrogen oxides—while oxygen, a crucial gas for human survival, is then released as a byproduct. Based on the average oxygen production of a well-established tree at 200,000–250,000 l per year, the saved trees currently planted at THE FORESTIAS can together generate 100–125 million l of oxygen. This amount of oxygen would be consumed by 1,000 adults over one year.

Amid ongoing concern over the harmful dust and smog containing PM2.5 particulates that are plaguing Bangkok and other areas around the world, trees moved from risky locations Bangkok-wide to THE FORESTIAS can consume up to 700 kg of hazardous particulates, based on the annual dust absorption by a strong tree of about 1.4 kg. These statistics align with figures from the United States Environmental Protection Agency, which has found that trees can reduce the severity of metropolitan smog, as particulates detected in areas with large trees are 7–24% lower than in areas with no large, strong trees. The process of transpiration, moreover, releases moisture to the environment bringing down average temperature. A study published in ‘Atmospheric Environment’ journal in 2017 further indicates that large trees, despite their power to take in polluted gases, contribute most in open spaces. For congested zones like cities, bushes may be the best natural solution to trap exhaust from vehicles, since large trees are too tall to capture harmful particulates.

Trees conserved by the Forest Rescue project will be nurtured to recover to full health and form a foundation for over 30,000 new trees grown from seed under an eco-forest concept to complete “Forest at THE FORESTIAS”, an urban forest spanning across 30 rai (48,000 sqm) with a section accessible to the public once the project is completed. This part of the metropolitan forest will form a public park where people can rest or observe nature. It should also release 6–7.5 billion l of oxygen, take in 420,000 kg of particulates, and reduce heat around the project by 2–4 ?C. 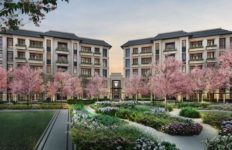 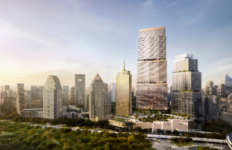 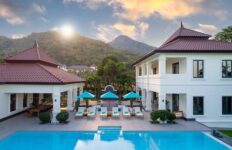 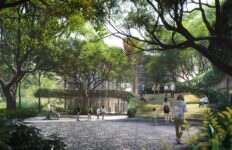