Take Bangkok’s tipple-loving pub crowd, add a drinking game made popular in countless US college dorms, shake well and get ready for the resulting critical-mass chain reaction that is ATOMIC, Thailand’s first and only gaming bar dedicated to the undeniably sophomoric sport of Beer Pong.

For those unfamiliar with this brewski-fuelled sporting phenomenon, think miniature tabletop basketball with booze, whereby each time a player successfully tosses a ping-pong ball into the opposing side’s cup, the latter has to quaff a ration of the amber nectar—so basically the more you lose the more you win! In recent years Beer Pong has quickly grown from the go-to party pastime of American frat boys to an international chill-time sensation.

ATOMIC owner Reugan Lim has seized upon Beer Pong’s growing local popularity, unleashing a slickly blinged-out version of the game on Bangkok’s Bacchanalian-leaning pub-goers. “I set out to offer customers a fresh alternative for an activity to enjoy during a night out drinking. My idea is to connect people in the local Beer Pong community through the fun and social bonding that the game creates.”

Foregoing the beat-up game tables and Ubiquitous Red Plastic Cups that define the game’s origin story, Lim has kitted out his purpose-built and hygienically sound operation using flashy, high-tech tables and special sensor-activate cups that light up when a ball is dunked. While the original game requires the ‘loser’ to drink beer from the actual cup into which the ball is dunked, ATOMIC’s game cups are filled with water, while “penalty” beer is dispensed from a jug by an impartial ‘pong-girl’/referee.

The awesome gaming element is a perfect fit for the fun, easygoing atmosphere, and the air of friendly competition makes it easy to meet new people and make new friends. The 240 sq.m fun palace features a loft-layout and offers ample space for the brightly lit-up game tables and players.

Though the game is historically a bros only pastime, Lim roundly rejects that nonsense. With gender inclusiveness at its very… well– nucleus, ATOMIC encourages lady-pongers to join in the fun and perhaps show some of the more confident guy players a new trick or two.

Located in the ever-trend ahead Soi Thonlgor, ATOMIC boasts a comprehensive bar menu of whiskey, vodka, champers, shooters and cocktails plus, of course (non-game related) beers, while promotion-seekers will get 2 bottles of Jameson Whiskey for 3,000 Baht. 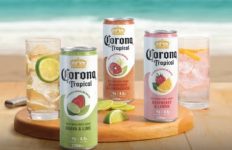 Corona Introduces a Taste of Paradise with Corona Tropical, the Brand’s First Non-Beer Beverage in the Global Portfolio→ 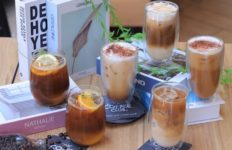