Touted as one of Thailand’s most talented golfing prodigies, Ratchanon Chantananuwat is no stranger to winning tournaments.

In 2013, Ratchanon, nicknamed TK, announced his arrival on the international golfing stage by topping the leaderboard in the Boys’ Under-Six age group at the IMG Golf Academy Junior World Championship in San Diego.

Four years later, when aged 10, he returned Stateside and once more ruled the roost, this time claiming top honours in the 9-10 Boys Division.

Not yet a teenager, the Shrewsbury International School Bangkok student’s golfing prowess shows no signs of abating.

TK’s latest success came in the inaugural Faldo Series Hua Hin where he upstaged his elder rivals in the second in a series of three Faldo Series qualifiers staged in conjunction with international schools in Thailand, held at Banyan Golf Club, a Golf Course Facility Member of the Asian Golf Industry Federation.

Thanks to a second-round three-under-par 69 – 10 shots better than his opening-day effort – TK won the combined Boys’ Under-13 and Boys’ Under-16 categories in what was the ninth event of the 2019-20 Faldo Series Asia season and was hosted by Shrewsbury International School Bangkok.

With back-to-back 73s, Concordian International School’s Pei Pei, playing in the Under-11 segment, was the leading overall girl.

Meanwhile, Norwich International School’s Pimpisa, an Under-13 player, triumphed in the Girls’ Under-16 Division. Among the boys, Bangkok Patana School’s Nuttawat ‘Password’ Sudjitporn unlocked the right combination to win the Under-18 category.

In the team event, pride of place went to Regents International School Pattaya, ahead of Bangkok Pattana School and Shrewsbury International School Bangkok, the tournament hosts, who also provided the individual winner for the Girls’ Under-21 in the shape of Vicky Tip-Aucha, who has just received a scholarship to Penn State University.

The first leg of the Thai qualifying trilogy took place at Laguna Golf Phuket in October while the final leg will be held at Pattaya’s Burapha Golf Resort from January 24-26, 2020.

Combined performances of players in the tournaments in Phuket, Hua Hin and Pattaya will be reflected in an Order of Merit from which five age-group category winners will progress to the 14th Faldo Series Asia Grand Final, to be hosted by Sir Nick Faldo at Vietnam’s Laguna Lăng Cô in March, 2020.

There they will join winners from the standalone Faldo Series Thailand Championship, led by Weerawish Narkprachar who topped the standings at Bangkok’s Watermill Golf Club & Resort in June.

The trio of Faldo Series Thailand Championship qualifiers are being run by Golf Development Asia (GDA) and Fore Management Group, both Bangkok-based companies that specialise in organising junior tournaments.

The 2019-20 Faldo Series Asia season is supported by The R&A and endorsed by the Asian Tour and the Asia Pacific Golf Confederation. The International Junior Golf Academy is a partner of the Faldo Series. 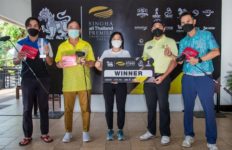