Browse: Home / LIFESTYLE NEWS / Lifestyle / Neramitnung Film is all set to make a splash on the international market in the second half of 2022 with the release I AM MONSTER LINE UP 2022 featuring 3 scary monster movies

The goals of this collaboration are to create a strong and quality business, increase income, and give Thai audiences as well as the international market the opportunity to view excellent films made by Thais.

Ms. Kanokwan Watchara, Managing Director of Neramitnung Film Co., Ltd, said, “In 2022, the company’s strategic plans is to enter the Soft Power business by dramatically increasing growth and underlining the company’s leading position in the Thai film industry to the international market. The company plans to produce a wider variety of movies for audiences. As the name implies, the I AM MONSTER line-up 2022 premiere features monster movies. This presents a challenge as there are not many ‘monster’ films being produced in our country to respond to global demand. This can be put down to various factors such as production investment, human resources, and timing of the production.”

Three renowned actors with different characters and styles – Pitchaya “Golf” Nithipaisarnkul, Pirat “Mike” Nithipaisarnkul, and Kritsanapoom “JJ” Pibulsonggram – have joined Neramitnung Film for the first time. The company has invested over Bt200 million for production as well as for advertising, public relations, and marketing both on air, online, and on the ground using every channel including print media, television, radio, websites, social media, and roadshow.

The films feature the collaborative work of two remarkable masterminds, Chavalit Krailertmongkol, Executive Director of Fatcat Studios, and an expert in film, TV series, TVC, visual effects, game cinematics and 3D animation, a recognised specialist in creative visual effects of monstrous creatures both in drama and cinema for more than 10 years. He will co-direct with Chitapol Ruengkal,  “Leio – The Gigantic Butterfly Lizards” will be the first monster film to premiere on July 28. “The One Hundred” is scheduled for release next. Chavalit from Fatcat Studios will co-direct with renowned filmmaker Pakpoom Wongchinda. The lineup will end with “Saeng Kra Sue II”, a romantic and scary drama, which is co-produced by Transformation Film, makers of Saeng Kra Sue I, directed by Papangkorn Poonyachantarak, a notable film and commercial director.

“The company took these three movies to screen in Hong Kong by participating at the Hong Kong International Film & TV Market (FILMART) under the title “Content Thailand” between March 14 -17, 2022. This event is one of the biggest market and media events in Asia. It creates opportunities, income, and development of the movie industry in Thailand and helps take Thai movies to the universal level,” Kanokwan said. 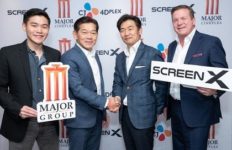