Elements, inspired by Ciel Bleu, the renowned fine dining restaurant at The Okura Prestige Bangkok, has retained its Michelin one-star rating for another year.

The announcement was made during the official Press Conference ceremony held on 16 December 2022 to launch the latest Thai edition of the famous French dining guide. The launch supported by the Tourism Authority of Thailand, took place in a virtual format.

Elements, inspired by Ciel Bleu is well known for its fine dining French cuisine prepared with premium produce and complimented by exquisite seasonal Japanese influences. Sebastiaan Hoogewerf, Executive Chef at The Okura Prestige Bangkok, and his team create dishes of refinement in a restaurant that was conceptualized in parallel with its sister restaurant, the celebrated Ciel Bleu at Hotel Okura Amsterdam, which holds two Michelin stars.

“I am extremely proud of my team at Elements, inspired by Ciel Bleu,” said Sebastiaan Hoogewerf, Executive Chef. “Since beginning our fascinating culinary journey in 2012 we have worked extremely hard to create and present French cuisine infused with contemporary touches of Japanese elegance, much to the appreciation of both our local and international guests. To have maintained those standards in what have been even more challenging times than normal is a real achievement.”

Hotel General Manager Niek Hammer echoed Chef Sebastiaan’s comments, congratulating the chef and his team while also acknowledging the inspiration and support of Chef Onno Kokmeijer and Arjan Speelman at Ciel Bleu in Amsterdam. “This is certainly well-deserved recognition for a restaurant that provides the highest standards in fine dining,” said Niek Hammer.

“Everyday Elements, inspired by Ciel Bleu presents magnificent dishes showcasing refined French culinary techniques, top-notch produce, wonderful seasonal influences from Japan, great service and a relaxed atmosphere. Dining at Elements, inspired by Ciel Bleu is a true journey in ‘guestronomy’ and this has once again been recognised by the world-famous Michelin Guide. The retention of its star is an honour for the restaurant’s entire team and all at The Okura Prestige Bangkok, where we strive for the ideals of ‘omotenashi’ – the Japanese art of providing heartfelt hospitality.” 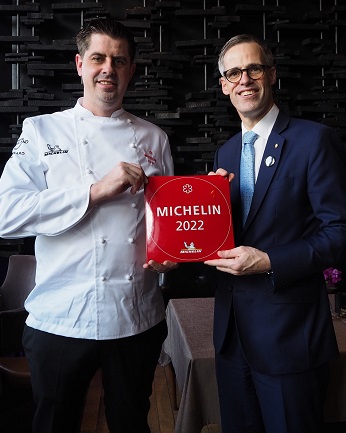 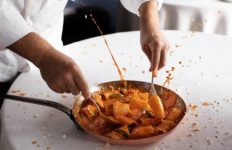