Tumblr
0
[pro_ad_display_adzone id="915574"]
The MICHELIN Guide and the Tourism Authority of Thailand (TAT) have co-hosted a press conference to announce the MICHELIN Guide Thailand’s expansion of its coverage to Thailand’s Northeastern region – widely known as “Isan” – in its sixth edition, to be released at the end of 2022.
With 20 provinces in this largest region of Thailand, four provincial cities – namely Nakhon Ratchasima, Ubon Ratchathani, Udon Thani, and Khon Kaen – are selected to represent the region’s distinctive and flavorful cuisine, as well as its remarkable natural and cultural heritage.

Northeastern Thai or “Isan” cuisine has an interesting background with cultural influences from ancient eras – including the Sukhothai Kingdom and Khmer empire – as well as from neighboring countries i.e. Laos, Vietnam, Cambodia, and China. The region has fields and forests on plateaus and mountains suitable for livestock farming. In addition, it is a significant area for quality rice cultivation – including the world-famous Jasmine rice and glutinous rice. Although Isan food does not contain any seafood ingredients due to its landlocked geographical location, the region has many rivers – notably, the Mekong River, where freshwater fish are in abundance.

According to Gwendal Poullennec, International Director of the MICHELIN Guides, Michelin inspectors have been impressed with the flavorful and distinctive Isan cuisine, as it employs simple cooking methods yet delivers subtle and complex flavour profiles – such as boiling, grilling, steaming, slow-cooking, and – above all – the food preservation technique, which is considered a highlight of the cuisine, as it showcases local wisdom in keeping fish and seasonal vegetables for longer shelf life as food ingredients. Fermented fish [Pla Ra], made of local fish fermented in salt and rice, is the most famous and major preserved ingredient that has been used in many dishes and sauces, and has been registered as a heritage of national cultural wisdom since 2012.

“Apart from unique food and interesting culinary background, there are many Isan-born chefs with food knowledge and cooking experience from working in world-famous restaurants abroad, and have now opened their own restaurants in their homeland. They play a significant role in elevating Isan food to the next level – using local ingredients combined with their superior cooking skills, setting a new standard for more high-quality local food. This is a great sign that the Northeastern region of Thailand will soon be an interesting tourist destination for local gastronomy, contributing to a good economy among local communities and markets,” said Mr.Poullennec.

Yuthasak Supasorn, Governor of the Tourism Authority of Thailand, has regarded the existence of The MICHELIN Guide Thailand during the past 5 years as a valuable contribution to TAT’s mission to promote Thailand as an international gastronomic destination. The increasing number of MICHELIN-starred, Bib Gourmand-awarded, and selected dining establishments featured in each edition of the MICHELIN Guide Thailand – partially as a result of the MICHELIN Guide’s further exploration of new territories across the country’s different regions, and partially as a result of local restaurants striving to improve quality and service to live up to prestigious MICHELIN Guide standards – help drive awareness and set new trends for gastro-tourism among local and international travelers on a broader spectrum.

Comparing the MICHELIN Guide Thailand 2018 edition to the latest 2022 edition, the number of overall selected eateries is up from 126 to 361. Out of this, the number of Michelin-starred eateries has increased from 17 to 32, and Bib Gourmand-awarded from 35 to 133. The coverage has expanded from “Bangkok” in the 2018 edition, to now include “Phra Nakhon Si Ayutthaya, Chiang Mai, Phuket & Phang-Nga” in the 2022 edition.

“Thailand’s Northeastern region has a vast potential – in terms of culinary culture and history, diverse tourist attractions, as well as charming local lifestyle. Apart from delicious and authentic Northeastern Thai or ‘Isan’ cuisine, people of all ages can enjoy visiting attractions like Khao Yai National Park – a UNESCO World Heritage Site – that situated mainly in Nakhon Ratchasima, Pha Taem National Park in Ubon Ratchathani, Ban Chiang Archaeological Site in Udon Thani, Phu Wiang Dinosaur Museum in Khon Kaen. Moreover, the Northeastern region has a lot of outstanding local food and handicraft products, with more than 34 registered Geographical Indication (GI) items, to look out for when shopping for souvenirs. With the launch of the upcoming 2023 MICHELIN Guide Thailand edition, we hope that not only will the entire world be aware of the vibrant culinary scene of the Northeastern region of Thailand, but also boost tourism and the local economy at the same time,” said Mr.Supasorn. 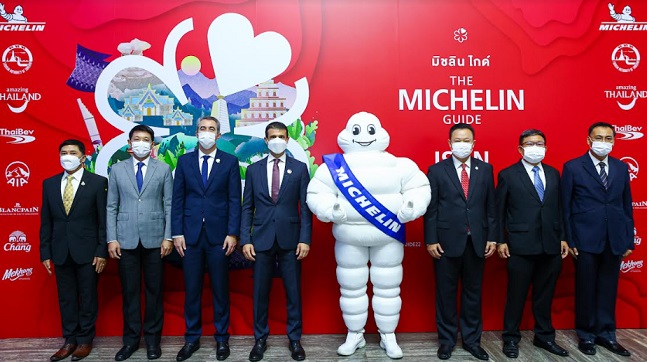