Browse: Home / MICE / Convention Bureau / Thailand Soars to Asia’s No.4 For International Conventions with Over 50 Billion BT Of Q2 2019 Revenue, Now Thailand Is Moving to Sweep 220 Billion BT Of Revenue with TCEB’s Leadership

Thailand’s MICE has soared to Asia’s no. 4 for international conventions with the number of meetings that reached 193. In Quarter 2, Thai MICE has continually grown in terms of volume and revenue. The number of domestic and foreign MICE travellers totalling 8 million has contributed to the rise of total revenue by 6.27% or 50 billon baht in value. The stability well reflects popularity and confidence In Thailand as the region’s leading MICE destination. TCEB is moving on to implement main strategy to penetrate into the ASEAN+6, CLMV and European markets with the revenue goal of 220 billion baht in 2019. Mr. Chiruit Isarangkun Na Ayuthaya, President of Thailand Convention & Exhibition Bureau (Public Organization) or TCEB, disclosed about the 2018 report of International Congress and Convention Association – ICCA that Thai MICE has moved up to no. 4 of Asia for international conventions with 193 events, ranking just behind Japan, China and Korea, but soaring as no. 1 among ASEAN countries. The movement obviously reflects an advancement from 2017 as Thailand was ranked no. 5 of Asia with the number of international conventions of 171.

In addition, the 2018 report of International Congress and Convention Association indicated that Bangkok ranked no. 2 (with 135 events), Chiang Mai no. 25 (25 events) and Pattaya no. 60 (11 events) of Asia for international conventions on provincial scale.

Considering foreign MICE markets, TCEB found that corporate meeting business has marked the highest growth, in terms of number and revenue. The number of travellers rose by 11%, contributing to the revenue growth of 7%. The top 5 international MICE travellers that entered into Thailand are as follows:

“The overall picture of Thai MICE market in Quarter 2 indicated that Thailand has maintained our status as a significant MICE destination and has continued to gain trust to hold major events amidst the fluctuation and fierce competition. Triumphantly, we can say that the success is from strong collaborations of involving parties from public and private sectors, who have dedicated to boost the growth of national MICE and enable it to prosper with stability.”

According to a research conducted by Frost & Sullivan (Thailand) Co. Ltd., the study found that economic impacts of MICE industry in the Fiscal Year 2018 may incur expenditures of 251,400 million baht, which will contribute to gross domestic product (GDP) by 177,200 million, or 1.2% equivalent of Thailand’s GDP.

TCEB President further said about the direction to drive Thai MICE in the latter half of 2019 that TCEB will continue to operate in line with the government’s policy accentuating 3 strategic goals, including the generation of revenue, the distribution of revenue to the region and the development of MICE through innovations. Altogether, TCEB has prepared to launch a stronger strategic plan to heighten Thailand’s MICE industry with regard to escalate the country’s competitiveness through integrated operations with other parties involved in Thailand’s MICE industry whose goals are similar with ours.

In implementing the strategy on revenue generation and economic development, TCEB focuses on penetration into ASEAN+6 and CLMV markets, while also maintaining Europe as key long-haul markets. Promotional marketing activities will include the following:

In the distribution of revenue and growth, TCEB will concentrate in the development of networks and promotion of regional MICE. The 5 key campaigns are as follows:

In the advancement of MICE through innovations, TCEB will empower event development based on innovations through 4 major projects, which are 1. MICE Intelligence & Resource Center, featuring the creation of MICE database for innovation and dissemination via website; 2. BizConnect and BizConnect Organizer, featuring the production mobile app for visitors and exhibitors; 3. Thailand MICE Innovation Challenge 2019, featuring the innovative idea competition for MICE industry, and 4. Project for the development and promotion of businesses in Thailand’s creative economy for global competition in collaboration with the Creative Economy Agency (CEA). 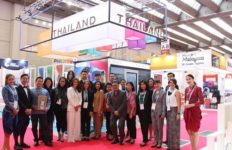