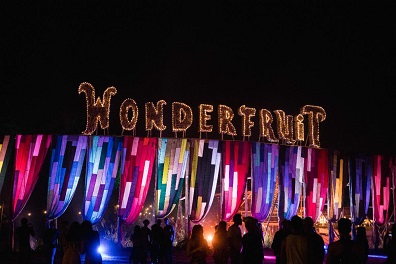 With now less than 4 months to go, Wonderfruit – set amongst the stunning backdrop of the Siam Country Club in Pattaya, Thailand, announce a further spread of mesmeric acts and activities to their hugely diverse programme that intersects art, music, culture and nature.

Trailblazers of sustainable design and purveyors of wonder through exploration, Wonderfruit set to deliver one of the most diverse and inclusive festivals of the year.

Having already outlined thought provoking concepts that bring a unique perspective to the total immersive experience such as Meditative Soundscapes, Sonic Nature Immersion, The Human Body as Axis Mundi and a Multi-Sensory Forest, the programme is further enriched with Neramit and Open Kitchen by Boonserm Premthada, Feasts and food workshops with The Food Trust and friends, Patom Organic Terpene bar, Natural food & crafts by Auntie Chan and friends across Thailand, Flavors of Isaan Rice with Tomogram x SS:AR x Isaan collaborators and Wonderfruit’s very own farm. All this is soundtracked by a world class music line-up, with a strong focus on regional discovery, expanding genres, cross collaboration sonic explorations.

Art & Architecture
Neramit by Boonserm Premthada
Neramit is home base at Wonderfruit. Open 24 hours, Wonderers can roll in at any time to discover off-kilter acts, experimental odysseys, ambient sessions, special projects and unique collaborations that follow no rules. Designed to evoke the safe feeling of home by Boonserm Premthada, once under the corrugated triangular roof, shelter and refuge can be found served alongside potent cocktails to recharge for your next round in The Fields. Standing tall upon a set of wheels, a daily ritual will summon Wonderers to join together in moving the structure. The concept is meant to inspire connection with each other and the natural environment in how it interplays with changing light and wind directions.

Open Kitchen by Boonserm Premthada
Welcoming a new permanent addition to The Fields, the Open Kitchen is an ode to women, mothers, aunts and grandmothers who, in Thai culture, are living scriptures and pillars of their communities, yet too often unrecognised. Artisanally and thoughtfully designed by Boonserm Premthada to minimise waste during the building process, the structure gives a second life to 30-year-old hardwood timber discarded from a nearby tobacco factory. Standing tall and open on all four sides to welcome visitors with open arms, once inside, you can meet aunts and grandmothers who will share with you their local culinary wisdom.

Food & Workshops
The Food Trust and friends
As part of Wonderfruit’s ongoing commitment to making sure Wonderfruit tastes delicious, they present their first feast. Rooted in sustainability, the circular food system, culinary heritage and health, chefs Paolo Vitaletti from Appia and Duangporn “Bo” Songvisava and Dylan Jones from Bo.lan are bringing their Food Trust concept from Chiang Mai to The Fields. From locally sourced ingredients to cooking methods, service style and waste management, the concept looks to minimise negative societal and environmental impacts. But the real spirit of this feast lies when looking beyond the plate: every dish will be presented by minority farmers who will bring the culinary traditions of their tribes to the table at Wonderfruit. They’re also bringing Northern Thai tastemaker Andy Ricker from Pok Pok along for the ride.

Patom Organic Terpene bar -Take a breath: let’s talk about…terpenes.
Terpenes are the plant magic responsible for their flavours, aromas and colours and deliver a mood-lifting effect thanks to their olfactory prowess. When you think about the calming effects of pine, lavender and hemp, it’s your relationship with their terpenes that your mind is connecting with. This year, Patom Organic Living will titillate the five senses through terpene-inspired experiences. Via an organic bar and workshops around creating colours and cocktails with a dash of yoga and dance, Wonderers are invited to brew their own way to feeling good naturally––terpene potions for all your emotions.

Natural food & crafts by Auntie Chan and friends across Thailand
Auntie Chan is a woman who struggled with thyroid cancer and leukemia, but she opened her heart to learn what she never knew as a way to battle it. She went from a woman who ate whatever she wanted to a diet of chemical-free food and vegetables inspired by a food-as-medicine group. Slowly, her condition improved, and her transformation was long-term. After plenty of experimentation, she went on to become a fermentation instructor who shares knowledge with others around Thailand.

Flavors of Isaan Rice with Tomogram x SS:AR x Isaan collaborators
There are more than 5,000 varieties of rice grown in Thailand and we’re celebrating how a simple grain can feed so many ideas at the Isaan Rice Tower, which sits within our paddies that sustain it. Experience the subtle (and not so subtle) flavors, scents and textures of more than 20 native rice varieties across workshops, art installations, architecture and more. Waste nothing and make pickled organic vegetables from rice washing water. Or try fermenting your own fragrant sato rice wine. Then, rediscover the side dish with Chefs Paisarn and Jib of Kaen Casual Fine Dining, who will teach you how to properly pair rice with different cuisines. Rice pairs with a lot more than just food, though. Steeped in tradition, the experience will be matched by acoustic Molam music served alongside potent rice-inspired libations at our Sato Bar by Por Sawat Up-hat, a master sato brewer from Khon Kaen joined by young and upcoming sato brewers.

Sonic Elements
A continuation from Moobaan Wonder, MSCTY Studio and Wonderfruit expand and deepen the Sonic Elements concept on-site through sound art installations and live performances intermingled with field recording compositions and sonic workshops. In addition, the project will be redefining the the soundscape of the ‘Air’ sound installation into a physical experience as well as creating as new sound installation around the ‘Wood’ element. The sound of natural surroundings became amplified in a silenced urbanscape, and this become the backdrop for Sonic Elements, the search for one’s own sound discoveries within the system of natural elements that essentially bind all life–earth, water, metal, air and wood.

2022 sees Wonderfriut putting collectives from all over Asia against the backdrop of Forbidden Fruit to ignite nocturnal energy while telling a unique story about local culture through music. Showcases include Rainbow Disco Club with their family of selectors from Japan, UNKNWN from the Philippines, Snug from Vietnam and FuFu Records from Hong Kong. Organic, heady and seeping in red, the decadent bamboo boudoir of hedonism is also being purpose-built this year as a larger semi-permanent structure.

Jaubi is a blistering Pakistani instrumental quartet that experiments with Hindustani classical and jazz music, weaving in splatters of hip hop, funk and electronic for a reimagined take on the traditional music of their homeland. Improvised and entirely composed by ear, their performances feel like an ecstatic showdown between instruments like the tabla, sarangi, flute, synths, guitars and drums with a narrative that hearkens heavily to philosophies of faith, spirituality and the self. They will be joined by flutist Tenderlonious and Polish pianist and synth cat Marek “Latarnik” Pędziwiatr, who they collaborated with on ‘Nafs at Peace’, for an all-together on-stage ensemble of seven. Powered by ancient sources, Wonderers can prepare to be fully enthralled by the eastern mysticism of Jaubi.

Efterklang is a trio of experimental soundscapers and musical adventurers from Denmark who make deep and sonorous music with emotional resonance. Intricately beautiful, their electronic-driven post-rock beginnings have evolved over two decades, and the modern version of the band is steeped in orchestral lushness, captivating compositions and expansive soundscapes. From playing alongside a 70-piece choir, making music in an abandoned Soviet mining town and their use of baroque orchestration, the band’s cinematic styling is grand and their on-stage delivery is rooted in community and collaboration––which will see them right at home on Creature Stage.

The ongoing history of Molam returns to The Fields, bringing with it the distinct charm of the hinterlands of Thailand to our bonafide cultural icon of Wonderfruit: Molam Bus. This year, the experience is being reattached to its historical roots and will journey deeper into the cultural nuances of Isaan. Music will be more expansive and workshops will help Wonderers better understand the craftsmanship behind some of the genre’s one-of-a-kind instruments, like the storied phin. Revel in the rhapsody of an unparalleled lineup of authentic Molam performances that crossover with electronic, dub and reggae. Catch a special show by The Paradise Bangkok Molam International Band who, alongside debuting new material, have invited friends from around the world for a spirited foot-tapping jam session that will probably never happen again. Plus Molam legends like Angkanang Kunchai, Toomturn Molam Group, and Thai reggae pioneer Ga-Pi. And for a truly original collaborative sound experience, excitement surrounds Mor-Khean Sawai Kaewsombat, Molam Louis Zui Pui and Molam Pidsamai Kaifah.

Polygon Live returns to The Fields with a focus on live sets by artists whose soundscapes best complement the 3D sound and light experience the cinematic venue is known for. Expect a finely tuned experience this year: a little larger, a lot greener and more immersive than ever. Artists like Viken Arman, O/Y, Pantha du Prince, Lee Jones, Lui Mafuta, okuma, Bassara, Riyoon, Roderic and Kusht are all delivering live performances created in syncopated harmony with the Polygon experience. DJs like Gerra G, Mamazu and Franca will also play with many more acts still to come. The Quarry also reignites Craig Richards, DJ Masda, Ben UFO, D. Tiffany, Elaheh and Krit Morton. 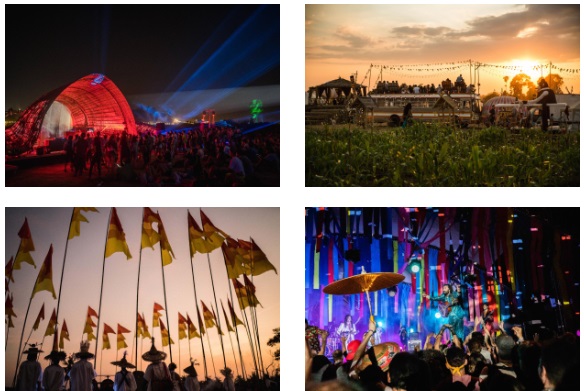