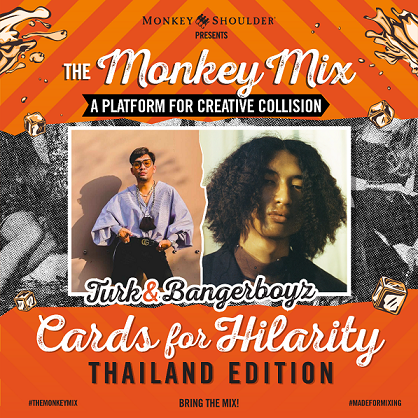 Continuing on its mission to make way for creative and cultural collisions, Monkey Shoulder unveils its second phase of The Monkey Mix campaign with the launch of Cards for Hilarity.

Created with a uniquely Thai touch, this party game promises to lift spirits by injecting some much needed laughter back into the party scene, showing players that the best nights can also happen right at home.

Proving that you don’t need to hit a club for a great time, Monkey Shoulder had 3D visual artist Bangerboyz and comedian Turk leap into #TheMonkeyMix to unleash all creativity for the creation of Cards for Hilarity. With Turk’s quick wit with Bangerboyz artistic finesse, the result is a  visually stunning deck of cards that celebrates the spirit of Sanuk and features elements of gameplay and cheeky challenges inspired by local nuances, dating culture and the party scene. Designed for those serious about having a great time, Cards for Hilarity promises a great laugh, and will have the party going – wherever you may be.

“I jumped at the chance to be a part of this collaboration, and it was such a pleasure to work alongside Turk in the creation of Cards for Hilarity. We had such a fun time working on this, and I hope this helps build bridges between new and old friends, all while they have the best time,” said Nuttapon Suriyo AKA Bangerboyz. “Before going to launch, we hosted our own night in and had our friends test the game. No matter how many times we played, the hilarity factor remained, and the game had us entertained and laughing non-stop! I really think Cards for Hilarity could be a must-have in parties across the country. It’ll be the first thing your friends ask for as soon as they arrive!” added Turk

“We were all used to nights out – they’re a whole lot of fun. However, we at Monkey Shoulder believe that with the right people and the right ingredients, you can totally have the most epic night with friends, even if you’re at home. Because it is not where you go, but what you do and who you are with that matters,” said Samuel Ng, Regional Brand Ambassador for Monkey Shoulder. “We can’t wait for Thais to get their hands on this special edition of Cards for Hilarity, and we hope they’ll have the best time with this.”

To get the party started, limited sets of Cards for Hilarity will be up for grabs via a giveaway on Monkey Shoulder’s Instagram page. Consumers can also get their hands on the game via  Gulp or with every purchase of a party bundle. For every sale of Cards for Hilarity or party bundle, Monkey Shoulder will be channeling a portion of the proceeds to support Thailand’s bar community.

The Monkey Mix brings together changemakers and mould-breakers from different scenes in Thai culture to collaborate and challenge the status quo. In the first phase of the campaign, singer and songwriter Cyanide and musician NoteP joined forces to release Slide (Feel the Mix) – an infectious tune that provided an outlet for Thais to sing to their hearts’ content and let it all out.

Stay tuned for the next phase of the campaign that will have Thais reclaiming the streets of Bangkok.

For more information on The Monkey Mix, visit www.instagram.com/makeitmonkey.th 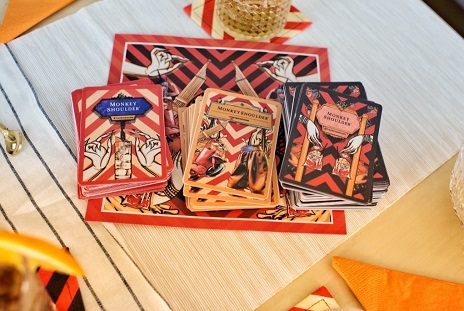