A total of 300 deals were announced in the Asia-Pacific (APAC) region during the week ended 24 May 2020, which is a decrease of 9.1% over 330 deals announced during the previous week, according to GlobalData, a leading data and analytics company.

An analysis of GlobalData’s Financial Deals Database reveals that the deal volume during the week also remained below the first quarter (Q1) of 2020 and April 2020 weekly average levels. 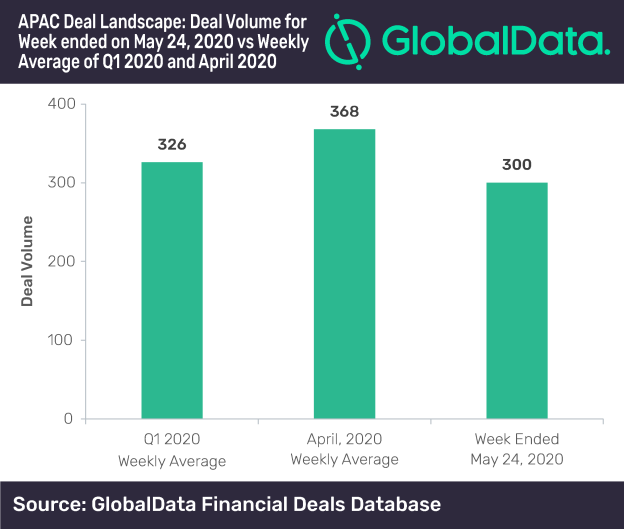 Deal activity decreased in markets such as Australia, South Korea and Hong Kong, which witnessed decrease in deal volume by 24.6%, 57.1% and 22.2%, respectively during the week compared to the previous week. However, China, India, Japan and Singapore witnessed growth in deal activity.

Sectors such as healthcare (including pharmaceuticals and medical equipment) and retail witnessed decline in number of announced deals during the week compared to the previous week.

The volume of key deal types such as mergers and acquisitions (M&A), private equity and debt offerings decreased by 8.8%, 44.4% and 57.6%, respectively, during the week compared to the previous week while the number of venture financing and equity offering deals increased by 7.4% and 3.7%, respectively.

COVID-19 will strike off US$50bn from the global duty free market in 2020, says GlobalData→