The virtual reality (VR)/augmented reality (AR) market—collectively known as extended reality (XR)—has been on the cusp of becoming the next mainstream platform, but it has remained niche for many years thanks to technological limitations and scant content. However, the COVID-19 global pandemic appears to have changed the technology’s fortunes—at least in the short-term—as homebound people search for ways to entertain themselves and connect with others, says GlobalData, a leading data and analytics company.

Lynnette Luna, Principal Analyst at GlobalData, comments: “Whether the adoption trend of XR will hold up as most of the world becomes free to move about again remains to be seen. But major events such as concerts, sporting competitions, and conferences will likely move ahead this year without live fans in attendance, giving XR the opportunity to shine. However, hardware and a complete XR ecosystem are still evolving.”

Facebook, which has a vision of making AR/VR the next communications platform, said it attracted nearly US$300m in non-advertising revenue during Q1 2020, with the number being largely driven by sales of Oculus VR products. The Oculus Quest is Facebook’s full-featured, reasonably priced consumer VR headset, while the Oculus Rift S is a dedicated PC headset. Both products are facing shortages as stay-at-home orders and social distancing have disrupted production and the supply chain. During Facebook’s conference call discussing quarterly earnings in April, CEO Mark Zuckerberg noted that it’s possible the pandemic could kick off an acceleration for XR adoption.

Luna continues: “Regardless of the higher interest in early standalone VR headsets like the Oculus Quest, consumer adoption of solutions remains unknown. The industry wants to reach a market that consists of standalone light-weight XR glasses with a plethora of experiences and applications. That is as long as 10 years away. If anything, the COVID-19 pandemic should demonstrate what XR can do.”

During the next decade, AR/VR is expected to take off in both the enterprise and consumer markets, enabling users to work and experience entertainment in a hybrid digital/real-world space. But form factors have not evolved yet to make this a reality. Prior generations of headsets have been tethered to computers or relied on smartphones as displays. Now standalone viewers, such as Facebook’s Oculus, are popular devices, especially during the pandemic, and are connected to Wi-Fi. Early 5G XR viewers will be tethered to smartphones until hardware makers develop lightweight standalone 5G XR glasses.

Luna concludes: “With new high-speed, low-latency 5G networks coming to market, mobile operators are hoping AR/VR becomes a key application that sets their networks apart from today’s generation of wireless technology. But these are still the early days.” 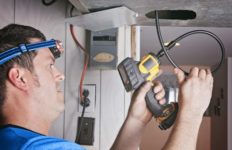