A new report from the Deloitte Center for Sustainable Progress (DCSP) released during the World Economic Forum’s annual meeting indicates that—if left unchecked—climate change could cost the global economy US$178 trillion over the next 50 years, or a 7.6% cut to global gross domestic product (GDP) in the year 2070 alone.

If global warming reaches around 3°C toward the century’s end, the toll on human lives could be significant—disproportionately impacting the most vulnerable and leading to loss of productivity and employment, food and water scarcity, worsening health and well-being, and ushering in an overall lower standard of living globally.

Deloitte’s Global Turning Point Report is based on research conducted by the Deloitte Economics Institute. The report analyzed 15 geographies in Asia Pacific, Europe, and the Americas, and found that if global leaders unite in a systemic net-zero transition, the global economy could see new five-decade gains of US$43 trillion—a boost to global GDP of 3.8% in 2070.

“The time for debate is over. We need swift, bold and widespread action now—across all sectors,” said Deloitte Global CEO Punit Renjen. “Will this require a significant investment from the global business community, from governments, from the non-profit sector? Yes. But inaction is a far costlier choice. The data bears that out. What we have before us is a once-in-a-generation opportunity to re-orient the global economy and create more sustainable, resilient, and equitable long-term growth. In my mind the question is not why we should make this investment, it’s how can we not?”

Transforming the economy for a low-carbon future will require extensive coordination and global collaboration throughout industries and geographies.

Governments will need to collaborate closely with the financial services and technology sectors—leading the charge on sustainable progress through global policymaking, greater investment in clean energy systems, and a new mix of green technologies across industries. According to the Deloitte Economic Institute’s research, collectively pivoting from an economy reliant on fossil fuels to an economy primarily powered by renewable energy would spur new sources of growth and job creation. Global cooperation and regulation are vital to setting the stage for a successful transformation.

“It’s important that the global economy evolves to meet the challenges of climate change,” said Dr. Pradeep Philip, Deloitte Economics Institute. “Our analysis shows that a low-carbon future is not only a societal imperative but an economic one. We already have the technologies, business models, and policy approaches to simultaneously combat the climate crisis and unlock significant economic growth, but we need governments, businesses, and communities globally to align on a pathway toward a net-zero future.”

“In order to find new and lasting solutions to these societal challenges, we must model new forms of cooperation and pursue a multi-party, holistic approach. The Turning Point analysis lays a powerful foundation of economic benefit and growth for decision-makers, influencers and participants to work from for individual and shared prosperity,” said Prof. Dr. Bernhard Lorentz, founding chair of the DCSP and Deloitte Global Consulting Sustainability & Climate Strategy leader.

The public and private sectors unite, collaborating to build effective and foundational frameworks and policies to drive actionable change.
Business and governmental leaders make significant investment, sparking structural changes to the global economy that prioritize low-emissions industries and accelerate the transition to net-zero.
The world’s geographies approach their respective “turning points”—when the benefits of a net-zero transition begin to outweigh the costs—and ultimately drive regional net-positive growth and value.
Following the turning point, society realizes a greener future—where interconnected, low-carbon systems underpin a clean economy that grows at an increasingly faster rate than its carbon-intensive alternative.
The analysis shows that no two paths to net-zero are the same. Each region will undergo its own journey based on a range of factors, such as the way governing bodies and societies are structured, exposure to climate change and overall risk profile, and marketplace strengths and capabilities. Similarly, each region will have its own unique turning point. For example, Asia Pacific is expected to see the benefits of a low-carbon transition as early as the 2020s, while Europe will not see returns on investment until the 2050s. The transition is expected to play out at varying speeds, however, if rapid action is taken, all regions are expected to achieve their turning point by 2070 and continue to reap the benefits long after. 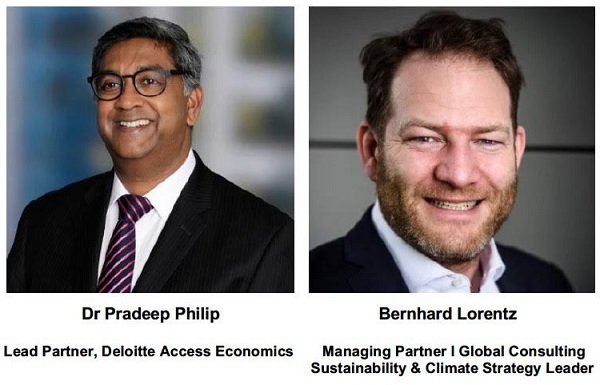