Six weeks after Russia’s invasion of Ukraine, the impact on travel freedom and mobility has been more dramatic than even the most pessimistic commentators were predicting at the war’s outset.

The latest results from the Henley Passport Index — the original ranking of all the world’s passports according to the number of destinations their holders can access without a prior visa — clearly illustrate the war’s profound and perhaps irreversible impact on freedom of movement within the region as a new Iron Curtain descends.

The invasion has triggered the worst refugee crisis in Europe since World War II, with more than 4 million Ukrainians having fled to neighboring countries. In response to Russia’s actions, the EU, the US, Canada, and other Western countries have closed their airspaces to Russian air carriers, imposed stiff travel bans on individual Russian citizens, and in many cases have stopped processing visa applications altogether, effectively condemning the Russian passport to junk status throughout much of the developed world.

In stark contrast, the EU has approved an emergency plan allowing Ukrainians to live and work in any of its 27 member states for up to three years while many other Western countries have adjusted their visa policies in favor of Ukrainian passport holders or waived visa requirements altogether. According to the latest Henley Passport Index, which is based on exclusive and official data from the International Air Transport Association (IATA), Ukraine currently has a visa-free/visa-on-arrival score of 143, a record high for the country, which now ranks 34th on the index (having climbed 26 places since 2012), while Russia trails behind in 49th place, with a score of 117 — a gap that is likely to increase even further in the coming months as a result of the conflict.

The providence of passports

Dr. Christian H. Kaelin, Chairman of Henley & Partners and the inventor of the passport index concept, says the latest update provides a unique snapshot of a volatile and rapidly changing world. “As the value of the Russian passport rapidly declines and the world opens its doors to Ukrainians, it is abundantly clear that the passport you hold determines your fate and dramatically impacts the opportunities you have. While it is impossible to predict what the world will look like in the shadow of a new Cold War, the latest index suggests that the divide between Russia and much of the Western world will only increase.”

Commenting in the Henley Global Mobility Report 2022 Q2, released today along with the latest Henley Passport Index, experts suggest that the following months will be critical for European security as well as for the prospect of post-Covid economic recovery in the CIS region. Ryhor Nizhnikau, Senior Research Fellow at the EU’s Eastern Neighbourhood and Russia program at the Finnish Institute of International Affairs, says, “There is currently no end in sight for this war. The Russian government looks set to continue its destructive campaign until its goals are realized. Ukrainian authorities and the people themselves cannot afford to make any concessions that will jeopardize the future of their country. Hence, the West should prepare for a long battle. Furthermore, there is also a threat of further escalation beyond Ukrainian borders. Russia has already shown its readiness to raise the stakes dramatically and may also choose to resort to ‘escalate to de-escalate’ tactics that directly target its European neighbors.”

Stephen Klimczuk-Massion, Corporate and Geopolitical Strategist at Berlin Global Advisors, notes that the global response to the humanitarian catastrophe unfolding in Ukraine has been heartening. “The world is gripped by dramatic images of vast numbers of Ukrainian war refugees streaming into Poland and neighboring countries — making this crisis one of the largest, and particularly fastest, movements of refugees anywhere in the world.”

Kevin Bürchler of SIP Medical Family Office in Switzerland adds to this, stating that “The current conflict in Ukraine has led to millions of people being either locked-in or forcefully displaced, with unprecedented effects on their health. As the world becomes more volatile, citizens of countries whose governments may be engaged in conflict may suddenly find themselves in trouble, and cut out from international healthcare services, just because of their passport or residence situation.”

As Dr. Parag Khanna, bestselling author and Founder of FutureMap in Singapore, notes in the Henley Global Mobility Report 2022 Q2, there is every reason to believe that creative solutions will be needed as mass migration becomes the norm. “When faced with war or climate disruptions our fight or flight instinct kicks in and the sensible response has been to move in search of more suitable conditions. We are gradually but noticeably becoming a migratory species again. In the coming decades climate disruptions threaten to make some regions of our planet uninhabitable, and millions, if not billions, of people will need to find new homes.”

While the current Ukrainian refugee crisis is a harsh reminder that conflict continues to displace people, most experts now agree that over the next 25 years the effects of climate change will become the most prevalent displacement driver worldwide. Prof. Dr. Khalid Koser, Executive Director of the Global Community Engagement and Resilience Fund (GCERF) and Member of the Governing Board of Andan Foundation in Switzerland, notes that this will largely impact people from the Global South, who are already suffering the devastating effects of the climate crisis: “Extreme weather events are increasing in frequency and severity. The risks are highest in the Global South — between 2010 and 2020, 15 times more people died from floods, droughts, and storms in very vulnerable regions including parts of Africa, South Asia, and Central and South America, than in other parts of the world.”

According to exclusive research by Henley & Partners and Deep Knowledge Analytics into the correlation between passport power and climate adaptation, wealthy and developed nations with the greatest visa-free access also score highly when it comes to ability and readiness to adapt to the impacts of climate change. The research compares the latest Henley Passport Index with the University of Notre Dame’s ND-GAIN Country Index, which is composed of two key dimensions of climate adaptation: vulnerability and readiness.

As Charles Phillips, a specialist in energy and climate change policy and consultant for Oxford Business Group, points out in the Henley Global Mobility Report 2022 Q2, “We can see close correlations between climate adaptation performance and international travel freedom, which can be explained by the fact that countries with better business environments, stronger and more stable institutions, and societies that assist in the realization of climate change investments are likely to be more economically prosperous and wealthy and therefore score more highly when it comes to travel freedom. These trends bring into stark reality the fact that your wealth, citizenship, and passport really do matter when it comes to climate risk”.

As Dr. Khanna observes, the data shows predictable correlations in terms of wealth, visa-free access, and climate readiness. “This is all the more reason to enable greater mobility for those who need it. Planning for mass resettlement of human populations is a moral and practical obligation we need to act upon immediately. We will either learn to adapt proactively or we will be forced to act reactively. Ultimately people who choose to relocate will be better off than those trapped in survival mode.”

Sebastian Mikosz, Vice President of Environment and Sustainability at IATA, the airline industry body, says forecasts indicate that there will be demand for 10 billion passenger journeys in 2050 (up from around 4 billion pre-pandemic). “Much of this growth will come from passengers who have never had the opportunity to fly before: in Asia, Africa, and Latin America. We owe it to this next generation of flyers to find sustainable solutions, so they can enjoy and benefit from air travel as we have done so far.”

Investment migration: a pathway to security

Henley & Partners has experienced unprecedented demand in recent months for investment migration programs that provide a pathway to residence rights or alternative citizenship acquisition. There has been an 80% increase in new enquiries over the past 12 months off the back of an already record-breaking year in 2020 as wealthy investors move to diversify their domiciles and relocation options in a bid to secure greater global access and optionality as a hedge against unrelenting market and political volatility.

Dr. Juerg Steffen, CEO of Henley & Partners, says holding more than one citizenship, with the range of personal access rights each guarantees, is the ultimate asset in a time of crisis. “The accident of one’s place of birth should not have to define one’s destiny. The benefit of a second or even third passport is often simply peace of mind and the knowledge that in the event of a catastrophe, relocation or repatriation is possible. Following the global pandemic, and now the war in Ukraine, this has become completely clear.” 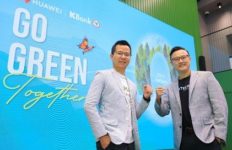 KBank Partners with Huawei to Launch Green Society Loan, Aiming to Save the Planet and Deploy Solar Rooftop in 30,000 Houses→