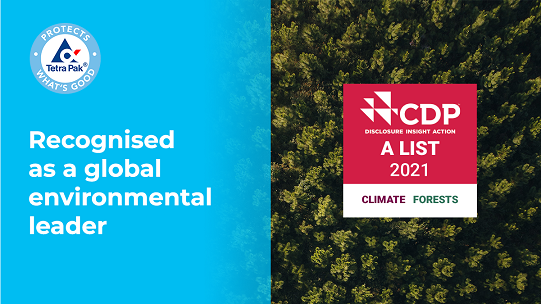 Tetra Pak has been recognised for leadership in corporate sustainability by global environmental non-profit CDP[1], securing a place on its prestigious ‘A List’ for the third year running for tackling climate change, as well as acting to protect forests – two of the three environmental themes covered by CDP.

With this accolade, Tetra Pak cements its position as the only company in the carton packaging sector to be included in the CDP leadership band for six years in a row.

Tetra Pak is one of a handful of companies that achieved a double ‘A’, out of nearly 12,000 companies that were scored based on data submitted through CDP’s questionnaires in 2021.

CDP’s annual environmental disclosure and scoring process is widely recognised as the gold standard of corporate environmental transparency. In 2021, over 590 investors with over US$110 trillion in assets and 200 major purchasers with US$5.5 trillion in procurement spend requested companies to disclose data on environmental impacts, risks and opportunities through CDP’s platform. A record-breaking 13,000+ companies responded.

A detailed and independent methodology is used by CDP to assess these companies, allocating a score of ‘A’ to ‘D’ – based on the comprehensiveness of disclosure, awareness and management of environmental risks and demonstration of best practices associated with environmental leadership, such as setting ambitious and meaningful targets. Those that don’t disclose or provided insufficient information are marked with an ‘F’.

CDP’s scoring for forests is conducted through the lens of the four commodities that cause most deforestation: timber products, cattle products, soy and palm oil. Companies need to score an ‘A’ on at least one of these forest-risk commodities to earn a place on the Forests A List.

Lars Holmquist, Executive Vice President – Sustainability & Communications at Tetra Pak, said: “We believe that decarbonising the food sector is vital in the race to net zero, and a key enabler for this ambitious goal is being transparent in our own actions. We’re delighted to be included in the CDP leadership band for the sixth time, as it recognises we are taking the right steps on combatting climate change and minimising deforestation risks.”

“Last year we pledged to reach net-zero GHG emissions in our own operations by 2030 while setting ourselves a net-zero ambition across the value chain by 2050. Our revised SBTi-approved target across all scopes 1, 2 & 3[2] means – amongst other things – reaching 46% GHG reduction across value chain by 2030, in line with a 1.5°C pathway. This is what the latest climate science has told us is needed to prevent the most damaging effects of climate change, and we are fully committed to play our part.”

The double ‘A’ score highlights Tetra Pak’s longstanding commitment to environmental action. For example, the company outperformed its 2020 climate goal, reducing its value chain GHG emissions by 19% compared to the 2010 baseline and demonstrating that decoupling climate impact and economic growth is possible. As part of this overall decrease, Tetra Pak has reduced its operational footprint [Scope 1 and 2] by 70% since 2010. In addition, earlier this year, Tetra Pak was identified by CDP as one of only four ‘trailblazer’ companies taking ‘best practice’ action to combat deforestation.

Looking ahead, the leading food processing and packaging solutions company has set additional ambitious commitments, such as switching to 100% renewable electricity in its operations by 2030 in line with RE100 commitment, increasing the use of polymers with renewable or recycled content targeting 20% (by weight of sourced volumes) worldwide by 2025 and achieving a positive impact on biodiversity through forest conservation and nature-based solutions.

Paul Simpson, CEO of CDP, said: “Many congratulations to all the companies on this year’s A List. Taking the lead on environmental transparency and action is one of the most important steps businesses can make, even more so in the year of COP26 and the IPCC’s Sixth Assessment Report. The scale of the risk to businesses from climate change, water insecurity and deforestation can no longer be ignored, and we know the opportunities of action far outweigh the risks of inaction. Leadership from the private sector is essential for securing global ambitions for a net-zero, nature positive and equitable world. Our A List celebrates those companies who are preparing themselves to excel in the economy of the future by taking action today.”

The full list of companies that made this year’s CDP A List is available here, along with other publicly available company scores: https://www.cdp.net/en/companies/companies-scores