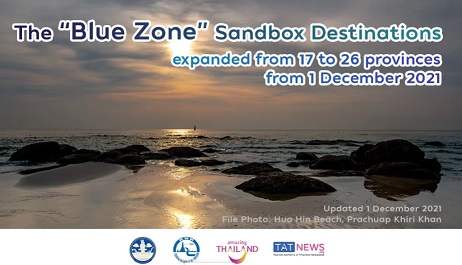 The Tourism Authority of Thailand (TAT) would like to provide an update on the latest announcement in the Royal Thai Government Gazette that further adjusted colour zoning for different provinces effective from today, bringing the number of the ‘Blue Zone’ destinations from within 17 to 26 provinces and seeing more COVID-19 curbs being eased nationwide.

This means nearly all businesses and activities in the Blue Zone destinations can continue to open with “New Normal” operations. These include all shopping venues, convenience stores, markets, cinemas and theatres, sports venues, hair salons and barbershops, massage and spa shops, beauty and aesthetic clinics, and tattoo shops. Restaurants and eateries can also resume normal opening hours. Meetings, events, and fairs can be also held normally with no limitation on the number of attendees.

However, all types of entertainment venues, including pubs, bars, and karaoke shops nationwide are to remain closed.

Similar relaxed measures for the Blue Zone provinces have also been extended to the 24 yellow zone provinces, with the exception for events and activities that must be organised with the number of attendees capped at below 1,000.

Provinces in the red and orange zones have also seen the COVID-19 restrictions being relaxed further, with malls, markets, convenience stores, and cinemas being allowed to resume normal hours. Restaurants and eateries in the orange zone can resume normal hours while in the red zones must close at 23.00 Hrs. The sale and consumption of alcoholic beverages for dine-in customers remain prohibited in the orange and red zones.

Meetings and events in the red zones can be organised for less than 500 attendees. Meanwhile, provinces in the orange zone can arrange more engaging activities; such as, sports tournaments, food fairs, and the like for no more than 1,000 attendees.

Eastern Region: Chanthaburi (only for Mueang and Tha Mai districts), Chon Buri (only for Bang Lamung, Ko Si Chang, Pattaya, and Si Racha districts, and only Bang Sarey and Na Jomtien subdistricts in Sattahip district), Rayong (only for Ko Samet), and Trat (only for Ko Chang and Ko Kut districts).

*Except for areas designated as “Blue Zone” pilot tourist destinations.