Leading Thai retail developer Siam Piwat has scooped two of the world’s most prestigious awards in the retail industry at the World Retail Congress recently held in Amsterdam, The Netherlands.

Siam Piwat is the owner and operator of some of Thailand’s most successful retail developments such as Siam Paragon, Siam Center, and Siam Discovery, as well as the joint venture partner of ICONSIAM — the USD 1.7 billion riverside landmark destination that opened in Bangkok in November 2018.

They were selected by the Congress because their “ideas have shaped retailing through the businesses and brands they have created, or by their skills in running the retail industry’s giants, demonstrated clear vision, courage and determination to make their dreams a reality.”

The World Retail Hall of Fame was established in 2007 to honour the retail industry’s most innovative and influential representatives.

The World Retail Congress also awarded ICONSIAM, in which Siam Piwat Group is a joint venture partner, the top prize of ‘Store Design of the Year 2019’ as part of the annual World Retail Awards.

The Grand Jury of the World Retail Awards said ICONSIAM is “breath-taking in its scope and scale and takes retail design into the future.”

Mrs. Chadatip Chutrakul, said: “Throughout 60 years, Siam Piwat has been a thought leader creating new prototypes and bringing new formats that have advanced the retail development sector in Thailand, and many of these projects have been game-changers.”

She said, “ICONSIAM shows that bricks and mortar still have a crucial part to play in successful retailing and they are assets only waiting to be differently leveraged within a new paradigm.  That new paradigm involves leveraging a very wide group of stakeholders by creating shared value for them all.”

According to Mrs. Chutrakul, ICONSIAM, with a gross floor area (GFA) of 750,000 square metres (approximately 8,073,000 square feet) made the creation of shared value into a ‘business sustainability’ strategy to help the success of such a large-scale initiative that requires the collaboration of many different groups.

“Our achievements were made possible because of the collaboration and co-creation of our tenants and retailers,” she said.

Mrs. Chutrakul added, “The benefits created by ICONSIAM also go beyond our tenant-partners to many different stakeholders at many different levels of society including artists, craftsmen, performers, small enterprises, the surrounding communities and even the city of Bangkok, too.

“For small businesses and artisans, we help them flourish and prosper by creating for them opportunities for new linkages, locally and globally; we help artisans, craftsmen or performers have a place on a globally visible stage to enhance the sustainability of their livelihoods, and we act as a platform that makes Thai values and all that is great about Thailand visible to the world.”

“We engaged with artists of every stature in the development of ICONSIAM, inviting them to express themselves at ICONSIAM through designs, decoration and other creations ranging from ceiling finishings and chandeliers to architectural elements such as columns.”

“Also, in the SookSiam zone at ICONSIAM, you can see how it brings together hundreds of small, mom-and-pop operations from Thailand’s 77 provinces — people who have mostly never operated out of their hometowns but are now selling on a global platform.”

“And, with ICONSIAM’s River Park, we made it into an open, public venue for community and regional activities.  And, later this year, we will open a world-class museum which will be an important addition to Bangkok’s cultural offerings,” she said.

Mrs. Chutrakul noted that “ICONSIAM has also had a transformative effect on the Chao Phraya River.  We acted as a catalyst for a multi-stakeholder collaboration that embraced riverside communities, hoteliers, river transport operators, sites of historical and cultural importance, and government agencies, which is already helping to revitalize many districts around ICONSIAM.” 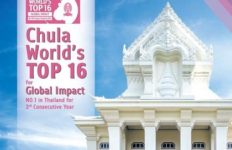 Chula Ranks No. 1 in Thailand for the 3rd Consecutive Year and Top 16 in the World with the Highest Impact on Society→ 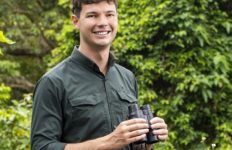 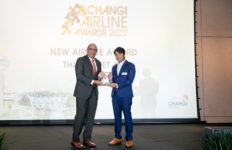