The first prize winner was Wilson Yip with “Forgetful Still”, a whimsical collection inspired by the aesthetic of absentmindedness. Mr Yip also took the Best Footwear Design Award. On receiving the two prizes, he thanked the HKTDC for the opportunity. “I put all of myself into this work and I am glad to be able to share it with tonight’s guests,” he said.

First Runner-up Louis Chow also expressed his gratitude at receiving the prize, saying: “In the design of this collection I strove for newness, and to effectively combine usability and originality.”

Also receiving two awards was Enzo Chan, who said: “The YDC is such a prestigious award and I am thrilled at receiving two prizes. I spent an entire year preparing for this and it’s completely beyond my expectations to receive these awards.”

The judging panel for this year’s YDC was made up of an impressive roster of fashion experts and media pundits. Chief Judge was Lawrence Leung, Chairman of the HKTDC Garment Advisory Committee, while Mihara Yasuhiro, famous Japanese fashion designer and owner of his own eponymous label, was VIP Judge. The other seats on the panel were taken by Michael Mok, General Merchandising Manager/Head of Merchandising at JOYCE; Jonathan Lee, Senior Area Manager (Asia) of Tomorrow Ltd; Peter Wong, Editorial Director of Vogue Hong Kong; Styling and Art Director Declan Chan; and Virginia Chan, Head of Footwear at i.t apparels Limited.

The judges assessed the young designers’ works based on creativity, originality, market potential, craftsmanship, use of fabrics and overall aesthetics, and offered expert feedback to each of the participants. VIP Judge Mihara Yasuhiro had particular praise for the winning piece, saying that Champion Wilson Yip “managed to paint fashion over the backdrop of everyday life, using elements of daily wear and injecting them with novelty and creativity”.

Fourteen previous YDC designer brands: 112 mountainyam, ARTO.,Charlotte Ng Studio, DEMO, Fake Fan, FromClothingOf, HARRISON WONG, From Another Planet, KEVIN HO, Lapeewee, NECRO POON, S.F.Z. & Son, YEUNG CHIN and YMDH returned to the YDC stage on Saturday to present a special MINI x YDC fashion show. The NEW MINI CLUBMAN made its first appearance in Hong Kong at this spectacular event to showcase the elegance and creativity shared between the car and the fashion designs. In addition, from 13 September to 8 October, MINI will run the MINI x YDC Anniversary Collection Exhibition at the MINI Tsuen Wan showroom and the YDC 2019 Winning Collection Exhibition at the MINI Wan Chai showroom to enable the public to take a closer look at the skills of the YDC designers.

The YDC has been organised by the HKTDC for more than four decades with the objective of nurturing and promoting young fashion talents. To further promote the international visibility of local Hong Kong designers, in 2012 the HKTDC launched FASHIONALLY.com, an online platform that showcases the work of local labels and talents to link them with global industry insiders and opportunities.

Champion and Best Footwear Design Award
The design: The designer has created a collection that addresses his own forgetfulness, which he refers to as an aesthetic of absentmindedness, and the structure of the clothing has been redesigned down to the smallest details. The oversized silhouettes and spray-dyed effect denote clumsiness, but the belt in each outfit allows for a smarter look if desired. The collars and hoods of the jackets are detachable, while buttonholes can be used to attach different accessories. The trousers are especially feature-rich, with details such as multiple pockets, exposed seams and lining, and magnetic buttons that automatically snap into place to avoid the embarrassment of the open fly.

– Designer: Louis Chow, Louis Design: “Already But Not Yet”

First Runner-up
The design: This menswear collection explores the process of design by blurring the boundaries between a finished work and an unfinished garment, inside and outside, front and back. Louis takes familiar silhouettes and adds in new twists, like a blazer with shoulders that expose the lining, attached with a quilted houndstooth scarf. A deconstructed trench coat uses interfacing materials with hand-stitched plaid patterns, while a two-way quilted coat/cape is also made from interfacing fabrics with quilted houndstooth patterns. The trousers feature asymmetrical hems that again highlight the inside-out aesthetic.

Second Runner-up and New Talent Award
The design: Enzo Chan was born in 1996, and this menswear collection is filled with memories that symbolise his life journey so far. Personal photographs with friends and family are digitally enhanced and turned into embroidery on T-shirts and jackets, and loaded with details both inside and out. The level of care and their prominence show the value of memories for the designer. The oversized silhouettes, multiple layers and subdued grey tones reflect Enzo’s personal style, while the addition of pink is an attempt to inject a sense of youth and vitality. The mix of fabrics is equally diverse, with suiting fabrics, knits and corduroy creating strong textural contrasts. 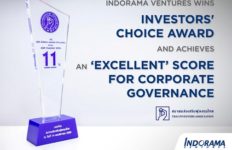 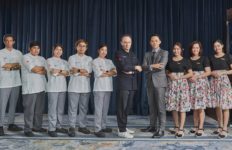 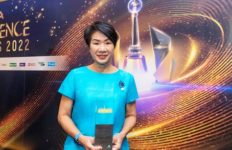 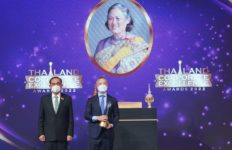