The 51st SAA AGM was conducted on-line and was graced by a dazzling array of Skål stars who turned up eager to hear news of this year’s happenings and the plans for driving post-Covid recovery.

During the Zoom pre-meeting period, warm friendly “HELLOs!” and genuine joy was expressed at seeing friends we had not met for so many months of covid-enforced lockdown.

The virtual meeting was attended by 6 of the 8 members of Skål’s Managing Executive Board (EB) (apologies were received from Director Annette Cardenas and CEO Daniela Otero who were both travelling.

Past World Presidents and Past Asian Presidents turned out in a fantastic show of support for ASIA which we are grateful:

The list of SENIOR SKÅL EXECUTIVES who join us were:

Full details of all the proceedings and the excellent speech and presentation of President Burcin can be found on our YouTube link https://youtu.be/6wAd7NU6Vn4.

During the Asia Presidents report, we learnt that through sponsorship, club activity and input driven by the National Committees, that membership in Asia had grown 10.29% despite loosing a few clubs to the pandemic.

President Andrew also announced the Asia Congress will now take place in Phuket 1-4 May 2023 at the Four Points by Sheraton,Patong Bay, PHUKET. He also announced that the mid-term SAA board meeting would also take place on the island in November to check progress.

Skål Asia will move its financial centre to Singapore from Spain as soon as arrangements are finalised. Thereafter invoicing for Skål Clubs would switch from Euros to SG Dollars.

“For membership we have been paying a great deal of attention to how the Asian Area could help and support our five national committees and 41 clubs throughout the 15 countries that today makes up the SKÅL ASIAN AREA. I am pleased to say that we have been very successful with our PROJECT 3000 campaign with a target to raise membership in Asia to 3000+ members  and have seen fantastic support in all sectors with growth in Active and Young Skål membership and our clubs have supported Director Shalini and Asia’s Project 3000 with substantial numbers of young students including a record number in KOLKATA now the world’s largest Skål grouping of Young Skålleagues with 177 members – an outstanding achievement!

Wood went onto say, “It is also pleasing to see that Kolkata is also bidding for the 2024 SKÅL World Congress which will be a world class event and possibly the best attended Skål World Congress of the decade,” he forecast.

Next let us fast forward to the awards presentations led by Past President Richard Hawkins, chairman of the international panel of judges, consisting of Uzi Yalon, Gerry Perez and Jason Samuel. The winners were announced after careful deliberations in the weeks prior to the AGM – the following were winners of the 3 SAA awards 2022: 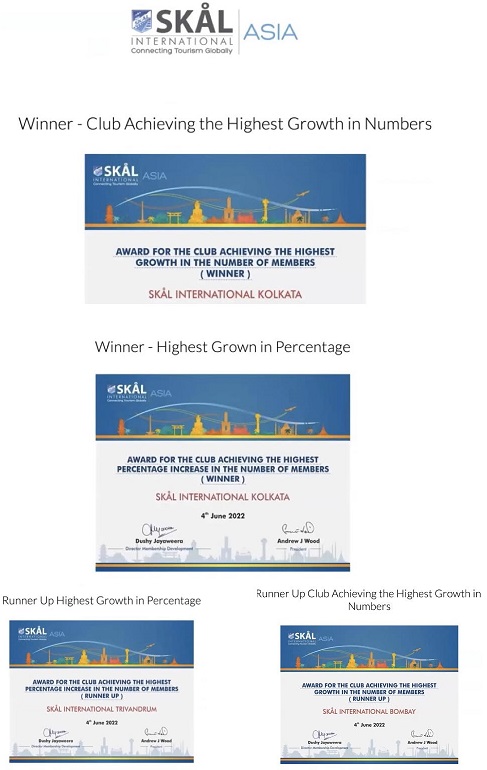 1. Goa won Club of the Year reflecting their tremendous efforts once again this year

2. SKÅL ASIA’s Personality of the Year 2022  was awarded to SIAA Secretary Shekhar Divadkar (IN) for his contributions to Skål.

Congratulations to SI Bahrain who won the bid for the 2024 Asia Congress, with an outstanding value package that was fully inclusive of all meals and gala dinners, hotels, transfers, free visas and net prices. The congress date will most likely be late May 2024.

Bahrain back in 2017 was famous for promoting single or twin room rates per room not per person and with no single supplements, effectively halving the cost of attendance for 2 delegates sharing one room. They have repeated a similar offer for the Congress in 2024. We salute the Bahrain bid as aims to keep prices affordable in a post-Covid World and it allows bringing our spouse or partners included in the package. It also allowed less affluent Skalleagues to share the room and spirit of Skål.

Finally, SAA Director of Membership and Retention Dushy Jayaweera announced the awards for membership growth were presented to Kolkata, Trivandrum and Bombay.

National President Thailand Wolfgang Grimm gave a heartfelt VOTE OF THANKS which went down very well with all attendees and shortly afterwards SAA President Andrew declared the meeting closed at 16:29hrs Thailand Time.

Andrew J Wood said after the meeting, “This was my 19th SAA AGM that I’ve attended, many of the attendees have, over the years, become good trusted friends and it is always good to see them on or off screen,” he said smiling and clearly pleased that the pandemic is heading to the exits. 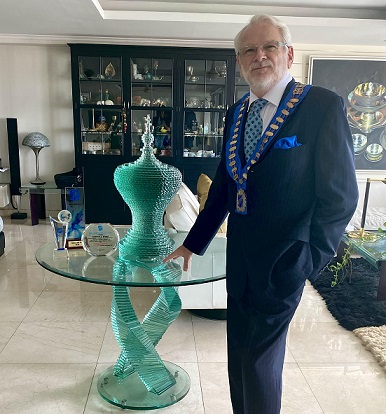