Tao Tong Bay, lying just southwest of Koh Tao Island, is known as one of Thailand’s top destinations for divers. This small sheltered spot is home to vivid coral, green turtles, blue spotted stingray and white-eyed moral eels, and its welcoming shallow depths make it ideal for divers and snorkelers of all levels to explore.

Directly opposite the Bay, at a depth of twelve meters, scuba-clad adventurers will also discover the otherworldly Ocean Utopia, a “living” sculpture installation created to interact with, and be transformed by, the ocean’s native flora and fauna.

Here in the warm southern currents, towering bronze and marine concrete figures rise from the sandy ocean bed, beckoning divers to pause, reflect and wonder.  Since their installation in 2016, these humanlike sculptures have gradually taken on a colorful coat of shells, small algae and coral shoots that cover their surfaces and demonstrate that nature will continue the artistic process in her own way.

This “evolutionary” underwater exhibit was the vision of the late Valérie Goutard, (better known by her artistic name Val), a self-taught, French-born resident of Bangkok, whose works in bronze have achieved worldwide acclaim and who will be honored with a career-spanning retrospective at SAC (Subhashok The Arts Center) in Bangkok beginning in January of 2021.

Val and her husband Frédéric Morel had long been drawn to Koh Tao. It was here they enjoyed memorable dives through the years, and so wanted to give back to the island and its community in a way that not only offered beauty and introspection but also helped to spread the message of coral reef conservation.

The couple found an eager NGO partner in the Koh Tao-based New Heaven Reef Conservation Program. NHRCP opened its dive school back in 1995, with a commitment to protecting the marine resources around the island.

The Ocean Utopia project was an ideal fit then, as NHRCP had set aside the Tao Tong Bay site for the preservation and regeneration of reefs. Val’s project, the sculptures themselves implanted with bits of broken coral to jumpstart the process, would serve as a new substrate for coral growth and marine life.

Marine biologist Chad Scott, director and founder of NHRCP, explains “Visually stunning installations such as these structures reach to the public’s emotions, and inspire them to contemplate the relationships between humans and coral reefs in a way that graphs and even photographs can never achieve.”

In the four years since the painstaking installation of Ocean Utopia (just consider the logistical challenges of placing sculptural objects each weighing several tons on the ocean floor), NHRCP has expanded Val’s project with additional structures and coral nurseries, as well as an underwater pathway leading 100 meters from the sculpture site to a pinnacle where marine life is exploding.

Val’s sculptures too, now teem with life and movement. The figures, which she named Volonté, Espoir and Étonnement (will, hope and astonishment) are adorned in vivid “dresses” of sea anemones and marine flora, while darting schools of fish bring a pulsing energy to the surroundings.

The artist’s choice of the name “Étonnement” in particular seems prophetic.  Long after their underwater camera flashes have faded, divers linger at the Ocean Utopia site in a state of childlike wonder, captivated by Val’s vision of “the fantasy of human life under the sea.”

“With Ocean Utopia my wish is for… a complete and free interaction between the strength of nature and my artistic creation.” 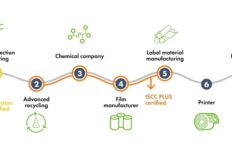 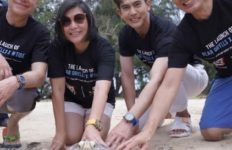 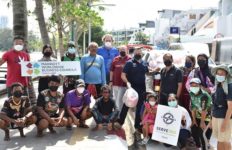