The counters are situated at the entrance of northern immigration area which is near dropping the luggage for self check-in. The changing starts from November 29, 2019 onwards and the counters open between 5.05 am and 8.05 pm. THAI Smiles Airways ask passengers to arrive at the Hong Kong International Airport three hours in advance before the departure time to avoid crowded area at the immigration area. Passengers could ask for more information at Call Centre; 1181 or +662 118 8888 around the clock. 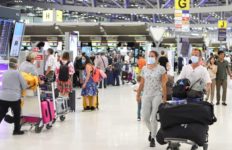 Aviation Authority Prepares for Reopening of Thailand to Foreign Tourists→

Expect Airlines and Cruise Lines To Require Proof of Vaccination→