Mr. Santisuk Klongchaiya, CEO of Thai AirAsia, explained that for the latter half of 2018 the airline plans to continually expand in the Indian market in light of its strong growth potential and as Indian travelers are already the sixth largest group to visit Thailand annually.  To make the most of their high spending power, the carrier will leverage Thailand’s ability to accommodate a variety of lifestyles with its shopping, activities, leisure, natural and cultural sites and hotels and spas and believes its 2 new routes will help stimulate both Thailand’s tourism sector and economy.

The routes also provide Thai travelers with the opportunity to experience new locations in India.  Visakhapatnam is a key port city that is undergoing notable growth and is the home of many world-class companies in the medicine, minerals and heavy industries.  Bhubaneswar meanwhile is the capital of the state of Odisha and is well endowed with historical sites significant to the Buddhist faith, making it a prime destination for devout Buddhists.  Known as the City of Temples, Bhubaneswar has also become a beacon for telecommunications and technological investment.

Thai AirAsia currently flies direct from India to Bangkok on 5 routes, from Chennai, Bangalore, Kolkata, Jaipur and Kochi.  Between 80 and 90 percent of passengers on the routes are Indian and they maintain a Load Factor Average of 87 percent.  For Thai AirAsia, India is a strong market with great growth potential that has always responded well to its activities. 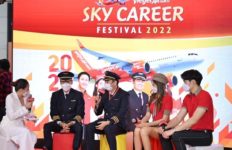