Thai AirAsia has opened its 7th and newest flight hub in Chiang Rai, stationing an Airbus A320 at Mae Fah Luang International Airport and inaugurating 4 routes from Chiang Rai to Macau, Singapore, Kuala Lumpur and Phuket with an aim to draw tourists and investors to Chiang Rai while offering the northern province’s residents AirAsia’s extensive network.

Ms. Witchunee Kuntapeng, Director of Ground Operations for Thai AirAsia, explained that AirAsia views the opening of a new flight hub much like building a new home.  The airline has stationed an Airbus A320 at Mae Fah Luang International Airport along with several staff, many of whom are from Chiang Rai and will now be able to work in their hometown alongside new local recruits.  It is the airline’s intent to provide travel options as well as economic opportunities for every region of Thailand. “Chiang Rai has very interesting potential as a tourism destination with its unique culture and way of life and has been gaining rapid global attention following the rescue at Tham Luang cave.  We believe it is a great time to promote Chiang Rai to travelers from across the nation and abroad and have added 4 routes from Chiang Rai to Macau, Singapore, Kuala Lumpur and Phuket, all of which have been well received.  We thank both the public and private sector in Chiang Rai for their wonderful support” Witchunee stated.

Service from the new hub was launched with welcoming ceremonies between 30 January and 1 February, 2019 for arriving flights on the 4 routes between Chiang Rai and Macau, Singapore, Kuala Lumpur and Phuket.  The proceedings were led by Chiang Rai’s Governor, the Tourism Authority of Thailand, Mae Fah Luang International Airport, representatives of local businesses and ticket agents and executives from AirAsia.  All of the routes were well received with Macau-Chiang Rai seeing a high Load Factor of 90 percent.  The airline will be marketing and promoting Chiang Rai as a flight hub with an aim to make the province a top destination for Thai and foreign travelers alike. 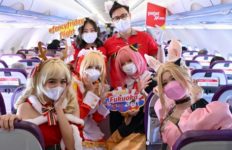