Emirates celebrated the inaugural flight of its new daily service from Dubai to Mexico City via Barcelona. The Emirates Boeing 777-200LR touched down in Mexico City yesterday at 16:15 local time, marking the airline’s first passenger flight to Mexico.

Emirates flight EK255, with a group of VIP guests and media on board, was welcomed by Mexico International Airport with a water cannon salute.

Salem Obaidalla, Emirates Senior Vice President, Commercial Operations, Americas said: “We are excited to start a new chapter in Emirates’ history, offering a seamless connection between Dubai, Barcelona and Mexico City. We expect this service to generate high demand and enhance business, culture and leisure connections as well as boost tourism and commerce between these markets.” 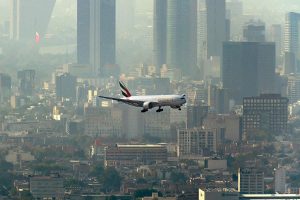 “Emirates’ arrival in Mexico City via Barcelona yesterday is the culmination of a lot of planning and hard work. We would like to thank the authorities and our partners in both Spain and Mexico for their support of the new route and look forward to provide our unique product and award-winning service to travellers,” he added.

The aircraft deployed on the route is Emirates’ newly refurbished two-class Boeing 777-200LR which offers 38 Business Class seats in a 2-2-2 layout, and 264 seats in Economy Class. While the Business Class seats are in the same design and shape of Emirates’ latest lie-flat seats, they are now two inches wider for a more comfortable journey.

In addition, the new Business Class cabin features a social area – unique to the Boeing 777-200LR fleet. The mini lounge area features snacks such as crisps, sandwiches and fruit, as well as beverages for customers to help themselves to during the flight. Economy Class seats onboard the 777-200LR have also been refreshed to the latest colour palette of soft greys and blues. The ergonomically designed seats come with full leather headrests that have flexible side panels and can also be adjusted vertically for optimum support.

Customers in all classes can enjoy up to 4,500 channels of on-demand entertainment on ice with 600 movies, over 200 hours of TV, and thousands of music tracks every month. The aircraft is also equipped with Wi-Fi and Live TV across all classes.

The new 777 flight will also offer up to 14 tonnes of cargo, opening up access to more global markets for Mexican exports such as avocados, berries, and other fresh produce. Emirates SkyCargo has been flying freighters to/from Mexico City since 2014 already and since April 2018 has carried over 33,000 tonnes of cargo of cargo on the route.

Mexico City is the largest city of Mexico and the most populous city in North America. Mexico’s capital is one of the most important cultural and financial centres in the Americas, accounting for nearly a third of the nation’s GDP. Located in the Valley of Mexico at an altitude of 2,240 metres, the city is famous for its historic centre known as Zocalo, a designated UNESCO World Heritage Site. Mexico City is also an important trade and industrial city, specifically in the automotive, medical supplies and pharmaceutical industries.

Dubai is also increasing in popularity with Mexican travellers with s with many attractive offerings including world-class shopping, eclectic architecture, and iconic landmarks including the world’s tallest building, The Burj Khalifa and one of the world’s largest malls – The Dubai Mall. Travelers enjoy visiting the city for its year-round sunshine, stunning beaches and fine dining options including Michelin star restaurants.

Nationals of Mexico, Spain and the UAE do not require visas to travel to any of the three countries and Emirates’ new daily service will allow travel between these destinations in style and comfort.

Emirates flight EK 255 will depart Dubai at 03:30 local time, arriving in Barcelona at 08:00 before departing again at 09:55 and arriving into Mexico City at 16:15 on the same day. The return flight EK256 will depart Mexico City at 19:40 local time, arriving in Barcelona the next day at 13:25. EK256 will depart once again from Barcelona at 15:10 bound for Dubai where it will arrive at 00:45 the following day, facilitating convenient onward connections to numerous destinations in India, South East Asia and the Middle East.