Emirates has wrapped up a stellar six months at Expo 2020 Dubai, wowing hundreds of thousands of visitors at it ultra-futuristic Pavilion.

As the world’s greatest show lowers its curtain, the airline looks back at 180 days of unique experiences at its Pavilion – teleporting visitors into the future of commercial aviation in 2071.

His Highness Sheikh Ahmed bin Saeed Al Maktoum, Chairman and Chief Executive of Emirates Group, said: “It has been an incredible journey. What started off as a bid and dream has turned into a reality. Emirates has been a partner of Expo from the very start, and we are proud to have played a significant role in the success of this mega-event. Dubai has an unbeatable record of always doing things bigger and better, and Expo 2020 Dubai was just that. Emirates’ extensive route network and seamless connectivity has truly made Dubai the world’s meeting point and the best place to be this year, and every year.”

As the Premier Partner and Official Airline of Expo 2020 Dubai, Emirates has played a significant role with bringing visitors across the world to the event. Over the past six months, the airline has brought millions of passengers to the Expo, from over 120 destinations, across six continents.

More than 40 Emirates’ aircraft donned with special Expo liveries, including the head-turning “be part of the magic” Expo livery, have flown across the airline’s network to spread awareness on one of the world’s largest global events.

Emirates has invested more than AED 100 million in advertising and other promotional campaigns to promote and spread awareness on Expo 2020 across its global markets. From partnering with famous actor, Chris Hemsworth, to launch a bold campaign during the opening of Expo, to captivating the world with a viral ad featuring its cabin crew on the tip of the Burj Khalifa – the airline has played a massive role with placing Expo 2020 Dubai on top of the world’s travel agenda.

The airline also rolled out various initiatives and multiple product offers, including specialised trade packages, early bird offers and a complimentary Expo Day pass for all Emirates’ passengers – in which more than 1 million customers redeemed on emirates.com.

More than 20,000 items of Emirates merchandise snapped up by Expo visitors

Since October 2021, Emirates has welcomed a significant number of visitors to its Pavilion. The impressive, multi-sensory installations and visual experiences offered visitors a glimpse into the future of commercial aviation. The Virtual Reality headset – in which visitors could explore aircraft interior cabins of the future – was the most visited and popular digital experience.

Unique, limited edition, memorabilia – such as the Emirates A380 “be part of the magic” Expo aircraft model, and Expo branded passport covers – were some of the most sought after items by aviation fans and Expo visitors who visited the Pavilion.

Over the past six months, Emirates has hosted a large number of global business leaders and esteemed state officials at the Emirates Pavilion, including His Highness Sheikh Mohammed bin Rashid Al Maktoum, Vice-President and Prime Minister of the UAE and Ruler of Dubai.

Emirates also hosted an intimate satellite session at its Pavilion during the Emirates Airline Festival of Literature – providing unique opportunities for literacy lovers to connect with renowned authors and entrepreneurs.

Started as an idea, became a reality 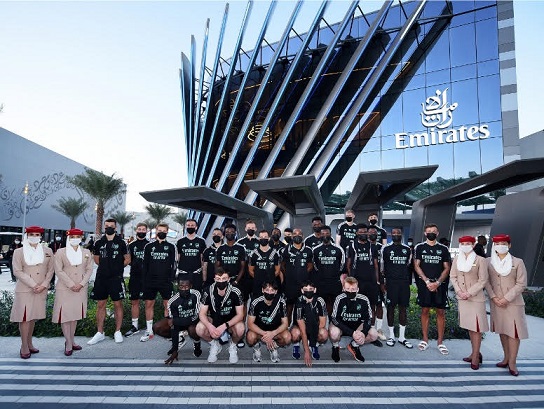