As the aviation and tourism industries have bounced back strongly, Vietjet Aviation Joint Stock Company (HoSE: VJC) kicked off 2022 with a great performance.

The company’s 1Q2022 financial statements reports a leap of 113% in pre-tax profit YOY owing to the rapid recovery of passenger transport and the ever-growing cargo business, which grew by 76% and 94% respectively in 1Q2022.

Vietnam’s aviation and tourism sectors have fully reopened since late last year to meet the pent-up traveling demand. In 2022’s first three months, Vietjet resumed its entire domestic network and relaunched regular international services. It has operated a total of 20,000 flights with more than 3 million passengers onboard across 60 domestic and international routes.

The airline’s total numbers of operated flights and transported passengers in 1Q2022 already passed 50% and 55%, respectively, of those in 2021, marking a milestone of strong recovery post Covid-19 pandemic. Regarding cargo transport, Vietjet has airlifted more than 12,500 tons of cargo volume in the first quarter of this year.

Vietjet has put its first two wide-body aircraft of A330 into operation and is expected to add the third one into its modern fleet in the coming time. Such were impressive performances by Vietjet as all airlines stayed focus on the domestic market since the beginning of the year.

The airline has also revealed its 2021 audited financial statements on positive notes. The parent company reaches a revenue of US$394 million (approx. 13.5 billion Baht) with the audited post-tax profit increasing by 91% over the compiled financial statement due to gains in financial activities.

As of December 31, 2021, Vietjet’s assets totaled nearly US$2.25 billion (77.55 billion Baht). Its debt-to-equity ratio stayed at 0.9 while the liquidity ratio was at 1.6, which were considered good indicators in the aviation industry.

In 2021, Vietjet has operated nearly 42,000 flights across its network with more than 5.4 million passengers onboard. The airline has reported over 66,000 tons in cargo transport, achieving fast growth with cargo revenue in particular rocketing by over 200% YoY. 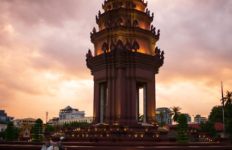