Earlier this week, Regent Seven Seas Cruises, the worlds leading luxury ocean cruise line, celebrated a significant milestone in the construction of the highly anticipated Seven Seas Grandeur ahead of its 2023 debut.

During a special keel laying ceremony at the Fincantieri shipyard in Ancona, Italy, the Regent Seven Seas Cruises leadership team was joined by members of Fincantieri to place one of the vessel building blocks formally. Since their respective debuts in 2016 and 2020, Seven Seas Explorer and Seven Seas Splendor have delighted discerning luxury travellers from across the world, earning a reputation as the most luxurious ships ever built, said Jason Montague President and Chief Executive Officer, Regent Seven Seas Cruises.

Now their sister, Seven Seas Grandeur, builds upon Regent’s rich three-decade-long history. Inspired by our heritage, this will be a ship that harmonizes elegance, comfort, freedom and choice, providing An Unrivaled Experience, and will continue to delight our guests for years to come. Gilberto Tobaldi, Ancona shipyard Director, said, Seven Seas Grandeur marks our third collaboration with Regent Seven Seas Cruises. 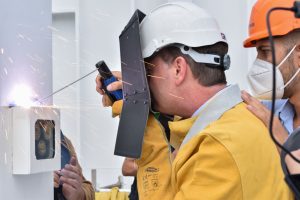 We are proud to partner with such a prestigious cruise line to develop Seven Seas Grandeur, which will be a beautiful model for the future of luxury cruising. Keel Laying Ceremony During the ceremony, a steel section of the approximately 55,500 gross ton vessel was lifted onto the dry dock. Montague and Tobaldi honoured the occasion by placing three custom-minted coins onto the keel of the ship, each one representing one of the sister ships – Seven Seas Explorer, Seven Seas Splendor and Seven Seas Grandeur.

A longstanding maritime tradition, the coins will forever remain embedded within the structure of the ship, bringing luck to all who sail aboard. The coins for Seven Seas Explorer and Seven Seas Splendor are replicas of those that were placed on their own keels, while the new coin for Seven Seas Grandeur includes the luxury cruise line’s 30th-anniversary logo. Seven Seas Grandeur A Heritage of Perfection Seven Seas Grandeur will host only 732 guests and have a gross tonnage of 55,500, providing among the highest space ratios and staff-to-guest ratios in the industry with the highest standards of Regent service.

To design the new ship, Regent Seven Seas Cruises engaged the award-winning Studio DADO – specialists in boutique cruising and hospitality interior design – to reimagine the distinct level of luxury found on board The Worlds Most Luxurious Fleet. Last spring, Regent unveiled designs for all 15 suite categories, from the one-of-a-kind Regent Suite with a reimagined space, The Parlor, to the spacious Veranda Suite.