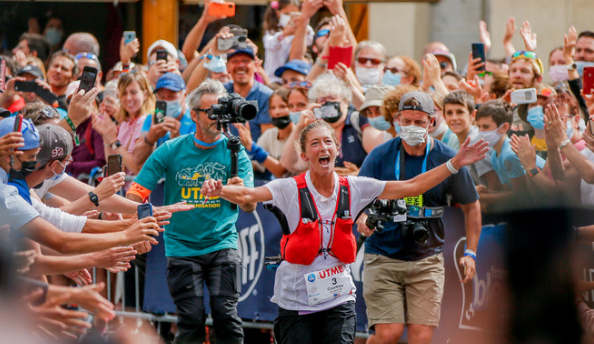 François d’Haene won the 18th edition of the UTMB® early this afternoon, after 20 hours and 45 minutes of racing. He becomes the first athlete to win a fourth title on the event’s flagship race (following victories in 2012, 2014 and 2017), just six weeks after winning and setting a new record on the American Hardrock race, held at an altitude of more than 3000 metres.

The winemaker from the Beaujolais region managed his recovery perfectly and reigned over his opponents throughout the race. Taking advantage of the retirements of Xavier Thévenard (50th km) and Tim Tollefson (78th km), D’Haene was initially in the lead with another favourite, the American Jim Walmsley. Coming out of Courmayeur (ITA), shortly before the halfway point, after having crossed the passes of Bonhomme and Seigne and the Arête Mont Favre with the American, D’Haene took a small lead, and left the Italian base camp with a 3-minute advantage.

On the long climb to the Grand Col Ferret that followed, Walmsley in turn threw in the towel, soon followed by Pablo Villa (ESP). The horizon opened up for D’Haene, with his adversaries Aurélien Dunand-Pallaz (FRA) and Germain Grangier (FRA) hot on his heels, just 10 minutes behind at the top of the Grand Col Ferret, and Mathieu Blanchard (FRA), 25 minutes behind. On the big descent to Champex (SUI), D’Haene maintained his lead and was 12 minutes ahead of Aurélien Dunand-Pallaz at the Swiss refreshment point. On the climb of Les Tseppes, Blanchard caught up with Germain Grangier and took the 3rd provisional place. In Vallorcine (km 150), D’Haene made an express pitstop (1 minute and 1 seconds) and set off again for the climb of the Tête au Vent and the Flégère, the last 900 metres of positive gradient of the race. In sunny weather, D’Haene kept up his pace, keeping Dunand-Pallaz at a respectable and constant distance, (around 15 minutes).

Having reached La Flégère, it was time for the descent down to Chamonix, to claim a 4th victory in the UTMB®. “After a difficult start to the season, I was able to motivate myself for this challenge,” said D’Haene at the finish line. “I relished this hard-won victory. My legs got stiff quite quickly. Before Courmayeur, we really battled it out with Jim Walmsley, and he paid for it. From Courmayeur to Champex, I suffered. It was a really intense race.”

Behind him, Dunand-Pallaz was close behind until the end. The holder of the world record for trail-running in 24h (17 218 metres) stayed close to the others throughout the 170km race, to finish in a magnificent 2nd place, in 20 hours and 58 minutes. “It was the big goal of my season, but I had my doubts until the beginning of August. I was also very scared at the beginning of the race, because I almost had cramps in my quads as soon as I got to St Gervais, but they recovered gradually. Above all, I fought hard to keep my 2nd place, because 3rd was close behind me, and I gave it my all until the Tête aux Vents where I understood that I was safely in second place...”.

Mathieu Blanchard completes this 100% French podium, a first in the history of the UTMB®, in 21 hours and 12 minutes Having joined ultrarunning in 2017, Blanchard gained fast-track learning of long-distance running. “I can’t believe it,” he said at the finish line. “This podium on the UTMB® was a dream; I didn’t think it would happen so soon. I am on another planet! Everything lined up today. I felt like I was flying the whole way! My energy levels stayed constant and allowed me to push myself throughout the race“.

The women’s race saw an impressive solo run by the title holder, Courtney Dauwalter (USA). Making it look easy, the American won for the second time in Chamonix, in 22 hours and 30 minutes, finishing 7th overall. The Colorado champion improved her winning time of 2019 by almost two hours.

Behind the American, Camille Bruyas (FRA) succeeded in her baptism of fire at the event, finishing in 2nd place. The Frenchwoman always at the front of the race overtook the Swedish runner Mimmi Kotka during the second part of the race to finish first, in 24 hours and 9 minutes, in 16th position overall. Mimmi Kotka completed this very international podium in 3rd place, in 25 hours and 8 minutes.