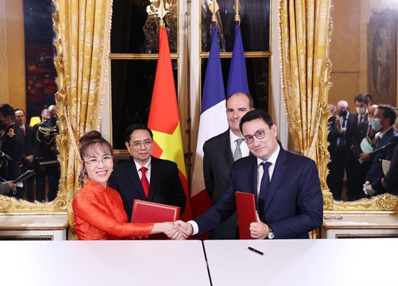 The agreement is founded on from the two parties’ existing US$10-billion cooperation.

Building on both sides’ existing cooperation in aircraft engine and engine services through CFM International[1] worth approximately US$10 billion, Vietjet and Safran will extend their cooperation to a long-term strategic partnership to cover more aircraft engine deals and a variety of other aspects such as aircraft seats and interiors supply.

In addition, Safran will provide Vietjet with training programs including management and technical training whilst also supporting the airline to establish MRO capabilities in Vietnam. Vietjet and Safran Electronics & Defense will accelerate cooperation to enable Vietjet to achieve best-in-class Flight Data Analysis solution for its whole airline’s fleet.

“We are very pleased to be an integral part of Vietjet’s growth strategy,” added Alexandre Ziegler, Safran Senior Executive Vice President, International and Public Affairs. “This agreement reflects the relationship of mutual trust between the airline and Safran and their recognition of our expertise and experience.”Safran is an international high-technology group, operating in the aviation (propulsion, equipment, and interiors), defense and space markets. Safran has a global presence, with 76,000 employees and sales of 16.5 billion euros.

As Vietnam’s largest airline in terms of the total number of passengers transported domestically, Vietjet currently operates a fleet of 90 aircraft. With a comprehensive network in Vietnam and Asia Pacific, the airline looks to further expand across continents thanks to its new and modern fleet in the near future.