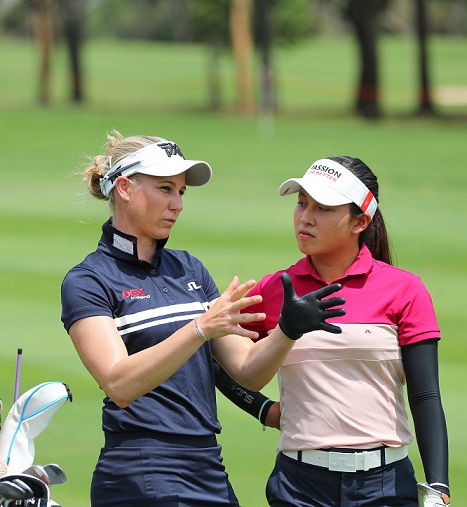 Rising Thai golf star Atthaya “Jeen” Thitikul, joined a practice session on Tuesday with Ryan O’Toole, an American player who turned pro in 2009 and has played on both the Futures and LPGA tours, in a bid to be prepared for the Honda LPGA Thailand 2019 at the Siam Country Club Pattaya Old Course, which will be held from 21-24 February 2019.

Atthaya “Jeen” Thitikul is a 16-year-old Thai golfer from Ratchabuti who won a gold medal in the mixed team golf competition at the Youth Olympics 2018 in Buenos Aires and a gold medal at the SEA Games 2017 in Kuala Lumpur, Malaysia. The youngest player in the Honda LPGA Thailand 2019 competition said: “I admire O’Toole for her strong heart and calmness. Today is great experience. I learnt techniques back pin, front pin and also how to control stress that I will adapt to compete in Honda LPGA Thailand 2019. For myself, I need to gain more experience from leading golfers like her and train more to improve my skills. I believe that putting in a good effort will make me successful.”

O’Toole played college golf at UCLA and recorded 12 top-10 finishes during her college career. She holds the course record at Royal Colwood Golf Club in Victoria, British Columbia, Canada, with a 66. O’Toole turned professional in 2009 and joined the Futures Tour on February 1, 2009. She played in her first LPGA tournament in August 2010. She said: “Her great success at a young age makes Atthaya one of the most interesting Thai players. I can’t believe that she is 16. She will have bright future in LPGA. I am sure she will step up further and be shining more in the world golf arena with bright future in LPGA. I want to encourage all junior golfers to train hard and to not give up. And someday your dream will come true.”

Honda LPGA Thailand 2019 to be organized from 21-24 February 2019 at Siam Country Club Pattaya Old Course. The tournament will be broadcast live in FULL HD on 9 MCOT HD (Channel 30). For more information, please visit www.hondalpgathailand.com or follow us on Facebook at www.facebook.com/lpgaThailand.