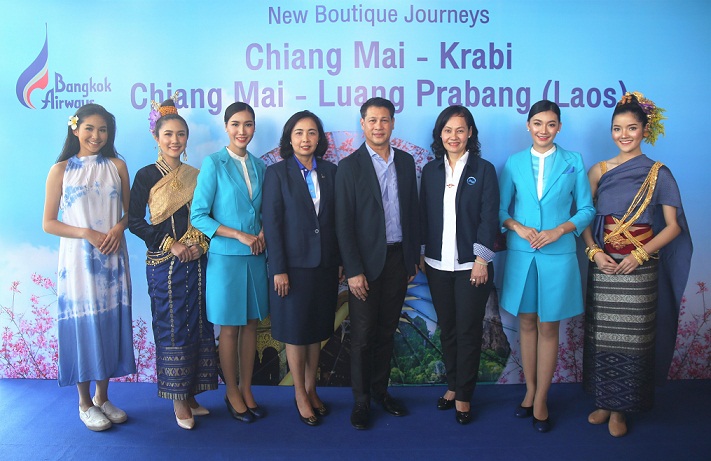 Mr.Varong Israsena Na Ayudhya, Vice President – Sales said “Our Upcoming Chiang Mai – Krabi and Chiang Mai – Luang prabang (Laos) services are considered as one of our strategic movements in terms of network expansion to cover CLMV countries which are Cambodia, Laos, Myanmar and Vietnam by using  Chiang Mai as  our flying hub

Chiang Mai is the largest and most culturally significant city in Northern Thailand, and is becoming one of the must-visit destinations for travelers from around the world. The number of travelers has increased continually every year.  I believe that the extra benefit of having these direct flights from Chiang Mai to Krabi and to Luang Prabang (Laos) will help facilitate and shorten our passenger’ journey without making a stop or transit in Bangkok .  Bangkok Airways has been utilizing Chiang Mai as one of our strategic hubs to connect with other destinations in both Thailand and overseas such as Chiang Mai-Bangkok, Chiang Mai – Samui, Chiang Mai – Phuket, Chiang Mai – Mae Hong Son, Chiang Mai – Yangon (Myanmar), Chiang Mai – Mandalay (Myanmar) and Chiang Mai – Hanoi (Vietnam) and the 2 new routes Chiang Mai to Krabi and Luang Prabang (Laos) to be added on 31st March 2019. We are confident that these new routes will be well-received by traveler”.

“Moreover, having a link to this beautiful beach destination will make it easier for our passengers, local people and people from nearby provinces to connect their journey and also helps promote cross-region tourism as well. For Chiang Mai-Luang Prabang (Laos) is an extra added Bangkok Airways’ route network to cover CLMV countries.  We foresee that  this UNESCO city  “ Luang Prabang“  will get a positive feedback as  the city is always on top of mind for both foreigner and Thai  travelers who enjoyed a peaceful atmosphere and richness of  local culture .” added Mr. Varong

“By introducing the new launch of Chiang Mai – Krabi and Chiang Mai – Luang Prabang (Laos) routes, I believe it will boost existing travel demand and enhance ease of travel for travelers. It will also appeal to new potential travelers in Luang Prabang and surrounding areas. Moreover, Bangkok Airways’ use of Chiang Mai as aviation hub connecting top-tier and second-tier cities in Thailand will generate tremendous flow of tourism expenditure within the country”, Ms.Pakkanan added.

Chiang Mai – Krabi (One-way) service will be operated three flights weekly at the start (Sunday, Tuesday and Thursday) during 31 March – 29 April 2019 and will be adjusted to a daily flight from 30 April 2019 onwards.The airline will use a 144-seater Airbus A319 aircraft to service this route. The outbound flight PG246 will depart Chiang Mai International Airport at 12.00hrs and arrive Krabi International Airport at 13.55hrs.