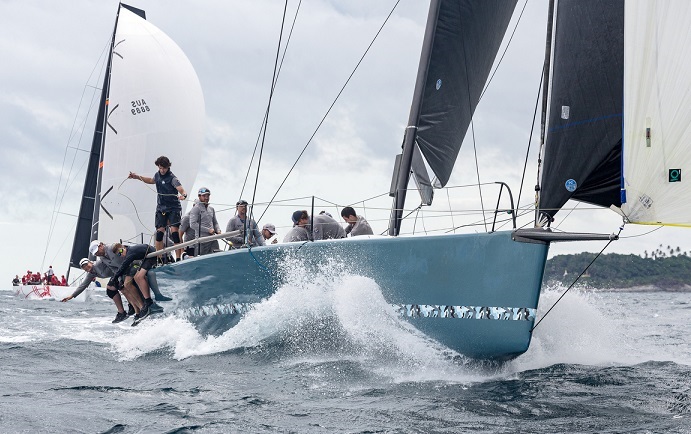 Heavy waves on Kata Beach hampered crews’ ability to reach their boats today, so the Phuket King’s Cup race committee delayed the start of racing for just over an hour. But the wind gods didn’t want to come out to play today.

After completing the first race, and shortening it due to lack of wind, the race officer, after consulting wind forecasts decided to call it a day and send the sailors home early.

In the IRC Zero class, the two TP52s (THA 72 and Team Hollywood) continued to battle it out with Kevin and Tom Whitcraft’s THA 72 triumphant beating Ray Roberts’ Team Hollywood by .08 seconds on corrected time. All eyes will be on this class tomorrow, the final race day, as Team Hollywood leads THA 72 by two points. Sarab Singh and Nick Burns’ Windsikher, the winner of 29th King’s Cup, will have to settle for third overall in this class.

Kazuki Kihara’s Japanese crew on Char Chan continued to do well in the IRC One class winning today’s race with Matti Sepp’s Judy placing second and Craig Douglas’ Ramrod coming third. At the top mark Ramrod had a half-leg lead in this class but when they turned the mark and the wind died, Char Chan passed and beat them.

Garry Holt’s Let’s Get It On was fourth followed by Morten Jakobsen’s Hanuman XXXIX. Craig Nichols Alright has been dogged with problems since the regatta started and didn’t start for the second consecutive race day. Heading into the last day, Char Chan has a three-point lead over Ramrod and a five-point margin Let’s Get It On. Char Chan used to be called Karasu, and it was one of the most successful boats in King’s Cup history.

In the Premier Cruising class, the Thai-owned X-Yacht Pine Pacific continued to sail well claiming another victory with Peter Cremers Shatoosh coming in second and Simon Piff’s Firstlight finishing third again.  This is another class that will be closely watched on the final day as Pine Pacific holds a two-point lead over Shatoosh after today’s racing.

Jakob Handte’s Fei Jian won the Charter Cruising Class today followed by Masami Yamashita’s Inlova. Torben Kristensen’s Kinnon was unable to be repaired in time after its collided with Hermann Schwarz’ 2Fast4you on the course in race day three. Going into the final day, Fei Jian has won this class but Inlova and Kinnon stand tied in points for second spot going into the final day of racing.

Jakob Handte, Markus Schweizes and Peter Jung form the core crew of Fei Jian, which they have been chartering for the past decade. Back home, they regularly sail on Lake Constance, Western Europe’s largest lake. Though accomplished sailors, this is the first time that they will their class in three decades of sailing the King’s Cup. Handte and Jung first joined the regatta back in 1993 after making a boat delivery from Singapore. Schweizes joined the team a short time later and they have been making a pilgrimage to Phuket ever since. They even came last year where there wasn’t a regatta. Aside from the sailing, they love the people and food in Phuket and take in the opportunity to go golfing when they are not sailing. Handte also gave credit to Phuketians for their urban planning and environmental clean-up initiatives. And he thanked the race committee as well for shortening the course on day three as the wind let up and not keeping the sailors on the water for too long today when it became evident that it was going to be very difficult to get in another race.

The Multihull OMR class saw Hermann Schwarz’ 2Fast4you bounce back from its collision with Kinnon on Wednesday defeating Hang Chen’s ZOE for the fourth time in five races giving it a commanding lead in this class going into the final day.

The Royal Awards Ceremony will be on 10th December 2022 at Beyond Resort Kata, Kata Beach, Phuket. 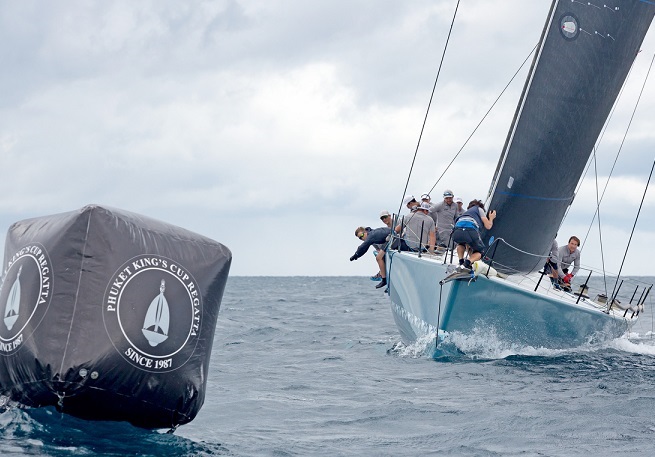