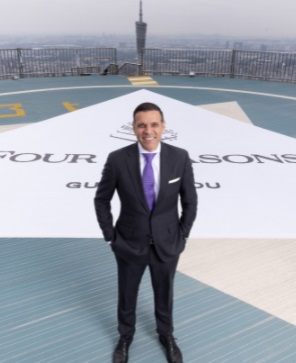 With a wealth of experience in urban properties, David Macklin assumes his post as General Manager at Four Seasons Hotel Guangzhou on familiar terrain.

Thanks to previous postings in Tokyo, Sydney, Hong Kong, and Washington, DC, he understands the demands of properties that cater primarily to business travellers as well as the cultural nuances that are at the core of a dynamic and international location.

“Our properties in these vibrant cities are more than hotels,” he says. “They become an intrinsic part of the urban fabric and Four Seasons Hotel Guangzhou is perfectly situated in the cultural and economic epicentre of southern China.”

Nestled atop the towering 103-storey Guangzhou Finance Center in the heart of the city, the 344-room Hotel that celebrated its 9th anniversary last summer has indeed become an indispensable business and social hub.

Born in England and raised in Australia, Macklin is looks forward to integrating himself in the local culture both on a personal and professional level. “The interaction with guests and staff is the essence of hospitality and an integral part of my DNA,” he says.

A graduate of Adelaide Hospitality School who furthered his education with a Catering and Hospitality Diploma from the City and Guild of the London Institute, David rounded out his formal education at the General Managers Academy from Cornell University’s prestigious School of Hotel Administration.

A keen outdoorsman, he looks forward to acclimating himself with Guangzhou by indulging his passion for cycling. “There is no better way to discover a place than on a bike,” he says. “You can see the city from the ground up and it is a great way to assimilate with a diverse range of people.”