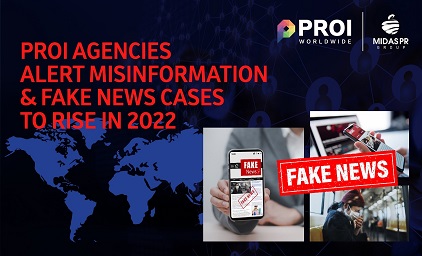 PROI Worldwide, the leading network of PR and communications agencies, issued an alert regarding a projected increase of fake news and misinformation in 2022.

Based on the insights collected from communication experts in 50 countries, PROI expects an escalation of information attacks and a growing number of communication crises related to misinformation.

The public relations profession emphasises the importance of providing truthful and accurate information, with PR practitioners generally considered responsible for making sure that the information they disseminate is true. In reality, however, some materials disseminated by PR professionals, media practitioners or social media users may not be absolutely accurate, or even can represent intentional falsehoods. This brings up the issue of “fake news” which has been a major talking point recently.  With the increased use of social media platforms and messaging apps, where information can be publicized in a matter of seconds, fake news has become a serious concern for the communications industry. It is widely acknowledged that information attacks, psyops and misinformation may pose a real treat to any organisation’s reputation, especially if the organisation becomes a target of a direct attack by fabricated news.

“The real problem with fake new is not that someone may disseminate false information in order to make others believe in things that are not true,” says Karin Lohitnavy, Founder and Master Connector, Midas PR Group. “It is not the falsity of the claims that is dangerous, it is the fact that too often, behind these false claims are individuals who pursue malicious ends, and who intentionally try to deceive others. Fake news is not merely false statements; examining them by trying to establish their true or false value is a futile exercise. Fake news does not attempt to state facts, and those who engage in producing and disseminating falsehoods do not intend to state something; instead, they want to create consequences for their audiences in terms of strengthening ideological beliefs, stereotypes and so on, in order to serve particular interests”.

There is no stopping fake news; in fact, fake news and misinformation can grow to become more sophisticated with further technological advancement. Throughout 2021, the world witnessed a slew of misinformation surrounding the COVID-19 pandemic and vaccination information. For example, in Thailand, an online rumour was spread about COVID-19 vaccines being a biological weapon designed to harm humans in an indirect manner. According to this rumour, individuals who receive the vaccine will not live very long after the injection. The Anti-Fake News Center investigated Xinhua Thai — the source of this rumour, and officially declared that the information was incorrect. There were also rumours about COVID-19 vaccines resulting in an excess of immunity, with a risk of lymphoma development, as well as unsubstantiated claims about the effectiveness of kratom leaves for treating COVID.

Although misinformation regarding COVID was one of the most discussed cases, the problem of fake news is much wider and can potentially affect any organization: “Organisations are confronted with issues and crisis-like fake news at varying degrees. However, when poorly handled, no matter the degree of severity an issue may turn into a full-blown crisis and may worsen to jeopardise the viability of a business,” said Jojo S. Nugroho, Managing Director, Imogen PR (Indonesia).

“At PROI, the world’s largest partnership of PR agencies, with 75 locally-owned independent consultancies present in 50 countries and 110 cities across the globe, we can deploy and draw upon a multi-disciplinary set of skills, experiences and resources around the globe,” said Lena Soh-Ng, PROI Crisis Group, APAC, Co-Chair and Senior Advisor and Founding Partner of Distilleri (Singapore).

“We strongly believe the most effective crisis preparedness plan is achieved through a close and trusted working partnership, where threats are identified, considered and planned for. A clear focus on priority risks, the establishment of a process that allows ongoing transparency of emerging risks, and the continual building of the organisation’s team’s capability, will fortify a comprehensive Crisis Preparedness Plan,” said Elaine Chuah, Executive Director, Priority Communications PR Sdn Bhd (Malaysia).

“Looking ahead, organizations should be cognizant of the threats, and ensure that they have in place a crisis preparedness plan that includes fake news and misinformation,” concluded Karin Lohitnavy.  “It is imperative to stay ahead of threats and be proactive in developing a crisis preparedness plan before a crisis hits. Once it hits, the plan comes to activation, and you’ll have to fix it fast.”