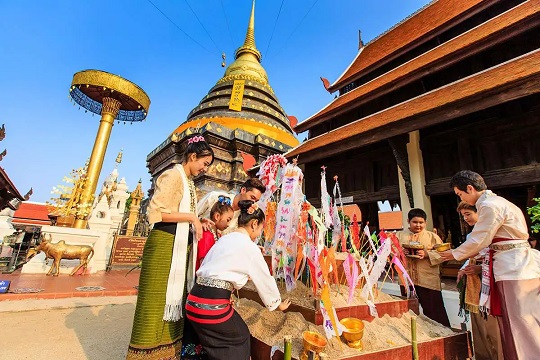 The Tourism Authority of Thailand (TAT) is hosting the ‘Amazing Songkran 2022 Celebrations’ at 10 temples in Bangkok and the ‘Songkran Music Heritage Festival 2022’ in Ayutthaya and Songkhla, as well as supporting other Songkran festivities in Bangkok, Chiang Mai, and Samut Prakan.

Mr. Yuthasak Supasorn, TAT Governor, said, “The Royal Thai Government has allowed the Songkran 2022 festivities to take place under universal prevention and COVID-free setting guidelines and to highlight the traditional and cultural aspects of the festival. As such, TAT is placing emphasis on honouring the centuries-old origins and traditions of the Thai New Year, a time when family comes first, respect is paid to seniors, and people visit the temples to take part in age-old ceremonies.”

The biggest and most important of Thailand’s annual festivals, Songkran in its purest form is a religious festival steeped in Buddhist and Brahman traditions. Marking the end of a 12-month cycle when the sun moves into April and there was traditionally a gap between rice harvesting and planting, Songkran in Thailand is officially observed as a three-day national holiday from 13-15 April, although celebrations can go on for longer – up to a week in some places.

This year, all Songkran festivities hosted or supported by TAT will take place in accordance with universal prevention guidelines against COVID-19. All participants are asked to kindly strictly follow these rules at all times, which include being fully vaccinated with an approved COVID-19 vaccine, or showing a negative test result using an Antigen Test Kit of no more than 72 hours.

Throughout the nine days, visitors are invited to mark the first step into the Thai New Year by taking part in the Song Nam Phra activity, and capture the moments at a special photo corner and augmented reality (AR) spot, as well as enjoy lucky draws and collect souvenirs.

Particularly during 13-15 April, TAT has arranged special festivities at Wat Saket and Wat Ratchabophit, including traditional culture and performances; such as, Khon masked dance, Thai-style antiphon singing, and Thai puppet show, as well as demonstrations of authentic Thai dessert making and fruit carving.

‘Songkran Music Heritage Festival 2022’ from 12-21 April, in Ayutthaya and Songkhla

TAT has selected Ayutthaya’s Wat Phra Ram and Songkhla’s old town as venues for the ‘Songkran Music Heritage 2022’ to enhance local and international awareness of both locations’ historical and cultural significances. Festivities at both locations will honour the centuries-old cultures and traditions of Songkran, while presenting modern day entertaining elements.

At Ayutthaya’s Wat Phra Ram, TAT has arranged a host of aged-old rituals and celebrations, including the Song Nam Phra activity, making Chedi Sai or sand stupa, demonstrations of handicraft products unique to the province; such as, weaving Pla-Ta-Pian fish mobiles (symbol of good health and prosperity), and traditional cultures and performances; such as, Khon masked dance and Likay Thai opera theatre. There will also be a fair selling handicraft products and famous cuisine of Ayutthaya and nearly provinces.

The temple itself will be decorated in a traditional vibe of Songkran, and will be featuring photo spots with visual idea decorations highlighting the province’s two unique symbols – elephant and Pla-Ta-Pian fish – in creatively different shapes and forms; such as, a Pla-Ta-Pian fish mobile tunnel, bamboo-woven elephant, and ‘Nong Chuenjai’ Pla-Ta-Pian fish mascot. Nearby archaeological ruins will be brightly illuminated.

At Songkhla’s old town, TAT has also arranged a host of aged-old rituals and celebrations, including the Song Nam Phra activity, making Chedi Sai, demonstrations of famous cuisine of the province; such as, Khao Yam or spicy rice salad, and traditional performances; such as, Nora dance drama. Meanwhile, there will be a mapping story presented by ‘Nong Mila’, the mermaid mascot specially created for the event to honour Songkhla’s most photographed tourist attraction – the Golden Mermaid statue on Samila Beach. Here too, there will also be a fair selling handicraft products and famous cuisine of Songkhla and nearly provinces.

Songkhla’s old town, which is dotted with colourful Sino-Portuguese style houses, will also be brightly illuminated and decorated in a traditional vibe of Songkran with a twist, reflecting the city’s former glory as the commercial trading centre of Southern Thailand. Among key items are Thai-style bird cages and kites as well as vivid colour party flag strips that will be used to adorn the town in combination with Chinese lanterns, and lighting in coordinating colours with Nora’s beaded costumes. Meanwhile, the specially-created landmark for photo-taking opportunity will feature the famous handwoven fabric of Ko Yo.

Particularly during the three-day holiday, from 13-15 April, TAT has scheduled music concerts featuring famous Thai bands and singers at both locations in Ayutthaya and in Songkhla.

Key festivities will focus on the traditional and cultural aspects of Songkran, including Song Nam Phra, and Rot Nam Dam Hua – a ritual to pay respect to the elders, family-focused activities, kite displays, merit-making activities, and a replica of a Thai temple fair.

This aged-old ceremony of creating ‘Nam Thip’ or “lustral water” was first reintroduced by TAT last year using water from three sacred water sources at Wat Buppharam, Doi Angkhang or Doi Inthanon, and the Ping River, which were part of the 108 sacred water sources obtained for the Coronation of King Rama X.

This year, the ritual will be held once again to mark the 726th anniversary of Chiang Mai on 12 April, and will be using water from the three sacred water sources and 6 additional sources at Wat Pha Lat, Wat Pa Dat, Wat Dap Pai, Wat Phrathat Doi Suthep, Wat Tharathip Chai Pradit, and Wat Phut En.

This year, the ceremony of creating ‘Nam Thip’ is scheduled to take place on 10 April at Wat Phrathat Doi Suthep, and a total of 10,726 bottles of ‘lustral water’ will be given to visitors to Chiang Mai during 12-16 April at 10 distribution locations via advance registration. Visitors are also encouraged to visit these temples which boast magnificent Lanna architecture.

Taking place at the Phra Pradaeng City Hall, this remains one of Thailand’s most fascinating ways to celebrate Songkran. Phra Pradaeng is where the local people observe Mon ceremonies in a traditional way, and their New Year traditions are very different to those found in the rest of the country. For a start, the celebrations here take place a little later, and feature a range of cultural activities, including a spectacular floral procession, a parade of the local Mon people in their colourful traditional outfits, a Miss Songkran parade, and a Mister and Miss Songkran Beauty Contest. Visitors will also have the chance to join merit-making activities in the local temples, pay respect to community elders, and enjoy folk plays and cultural performances, as well as enjoy famous cuisine of Phra Pradaeng.

Cultures and traditions for enjoying Songkran in Thailand
Visit the temple
Like Christmas in the West and the New Year in China, Songkran in Thailand is when families travel long distances to come together. And on Songkran Day itself (13 April), Thais visit their local temple to pay respect to the images of the Buddha and seek good luck for the New Year.

The main activity is the pouring of scented water onto the sacred Buddha images of the temple – a ritual called Song Nam Phra. It seems that in past times, lustral water used to clean Buddhist statues was regarded as spiritually cleansing and so collected and gently dripped over family members for luck – called Rot Nam Dam Hua.

You don’t have to visit the temples to carry out this charming tradition of bathing the Buddha images. Many malls and shops put out their own images of the Buddha with a bowl of scented water, so that people get the chance to Song Nam Phra wherever they are. Remember, that water is not poured onto the head of the Buddha image, rather onto the torso and body. This water is traditionally scented with a perfume called Nam Op.

Build a sand stupa
Around Songkran do not be surprised to see what appear to be large sand castles in the grounds of temples. These are made as a way of replacing the earth taken away throughout the year on the shoes of people coming to pray. These Chedi Sai, as they are known are often decorated with flags, coloured pebbles and money, and families or groups of friends work together to build them.

Pay respect to the elders
One charming element of Songkran, often overlooked by visitors is the tradition of paying respect to elders in the Thai family. This is usually done on the second day of Songkran (14 April), and young people prepare rose and jasmine water as well as Nam Op scented water to wash their parents’ hands in a ceremony called Rot Nam Dam Hua. In return, the parents give the children their blessings marked by a garland of jasmine.

Last but not least, kindly be reminded that this year the Royal Thai Government has prohibited water splashing, powder smearing, and foam parties at Songkran locations and in public areas. The sale and consumption of alcoholic beverages are also prohibited at the event’s location.

Share
Facebook
Twitter
Pinterest
WhatsApp
Previous article
Emirates launches social media competition in search for the lucky Thai kid to become a player mascot at the FA Cup final in London
Next article
British Council with Food Innopolis and UK experts establish the vision for the Thai food and agriculture sector to drive the country in becoming the food hub for the future.