Thai AirAsia to undertake crowdfunding as part of fundraising strategy 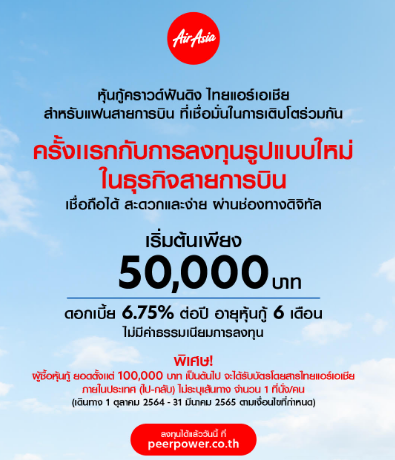 As part of its innovative fundraising strategy, Thai AirAsia has launched a crowdfunding campaign, approved and regulated by the Securities and Exchange Commission (SEC), that allows retail investors and the general public to invest in the company and support its journey to recovery.

The debenture will be available for subscription through the Peer Power investment platform at peerpower.co.th.  AirAsia is confident of strong support from the investing public towards the campaign, drawing from positive signals from the airline’s restart of domestic flights, with 11 routes to be brought back into service from 3 September.

Thai AirAsia Chief Executive Officer, Mr. Santisuk Klongchaiya, explained that throughout the COVID-19 situation, Thai AirAsia continued to receive strong support from its Allstars as well as those outside the company who have remained confident in its growth potential.  The carrier has seen a large number of people who wish to support it so that it can quickly return to its pre-Covid strengths.

“We thank everyone for all of their support throughout this difficult situation. This crowdfunding campaign will be another avenue for people to show their support. We are touched by the positive response that we have received so far that shows how much support and confidence the public has in AirAsia, which is just as important to us overcoming this crisis” Mr. Santisuk said.

Crowdfunding for Thai AirAsia has opened via peerpower.co.th. The low minimum requirement for investment will enable retail investors to actively participate in the drive. The campaign also marks Thai AirAsia’s first foray into the new and increasingly popular funding alternative, which was recently approved by the SEC.

Proceeds from the crowdfunding campaign will allow Thai AirAsia to shore up its short-term stability. It will be concurrently maintaining its existing funding plan, which consists of a capital raising and a business restructuring of Asia Aviation Plc.