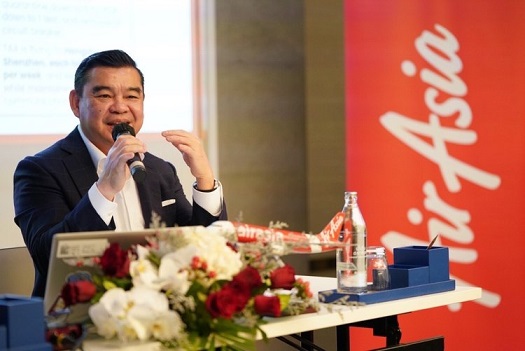 Thai AirAsia is set to close the year with 10 million guests flown, backed by the strong demand for  domestic and international travel especially in the fourth quarter.

Maintaining its largest share of the domestic market, Thai AirAsia also experienced its highest post-Covid? aircraft utilization rate of 12 hours in November, while the average load factor for the year is predicted to be a high 81 percent with an on-time performance of 90 percent.

With the tourism and aviation sectors expected to fully recover in 2023, Thai AirAsia is prepared to return to near pre-COVID-19 operation after seeing a strong domestic market and a steadily improving international market, taking advantage of its greater staff numbers and large fleet of 53 aircraft. While China has yet to open its skies, improvements have signaled a relaxation of restrictions by the first quarter of 2023.

Mr Santisuk Klongchaiya, Chief Executive Officer of AirAsia Thailand, said: “We predict the tourism industry in 2023 will return to conditions prior to the COVID-19 pandemic in line with a Tourism Authority of Thailand’s evaluation that 18-30 million tourists will visit Thailand next year. While China remains a key variable to recovery,  but with the Chinese government anticipated to scale back travel limitations during the first quarter of 2023 and consider a quota for inbound flights, this will present an important opportunity for Thailand’s tourism and Thai AirAsia is ready to immediately serve flights to China with our large fleet of 53 aircraft. On the whole, we expect to carry a total of 20 million guests next year, double that of this year’s 10 million and a huge jump from 2.9 million in 2021.”

“Apart from the Chinese market, which is a major target, Thai AirAsia has altered its strategic plans to focus on stability and will no longer be dependent on any single market. In 2022, we received overwhelming response from the Indian, South Asian and Asean markets, abd we are seeing similar success in the Japanese market with the Don Mueang-Fukuoka route. For 2023, we plan to add even more routes to high potential markets such as Nepal, Pakistan and other cities in India with the expectation of returning to no less than 90 percent of our pre-COVID-19 capacity,” Mr Santisuk said.

Throughout 2022, Thai AirAsia was able to rapidly recover from the pandemic by leveraging its strong domestic network, which was bolstered by close collaboration with the Tourism Authority of Thailand on We Travel Together campaigns, as well as nationwide discount programs and campaigns for international markets. Consistently resuming international routes, the carrier most recently introduced Don Mueang-Taipei with a four-time weekly frequency with bookings now available via the airasia Super App.