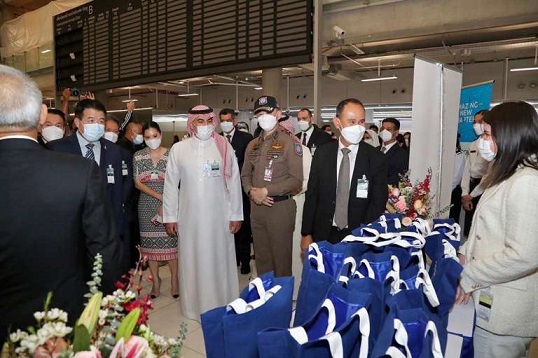 All relevant Thai agencies have coordinated efforts to ensure a smooth arrival of the flight with the welcome ceremony led by H.E. Mr. Phiphat Ratchakitprakarn, Minister of Tourism and Sports, together with Mr. Siripakorn Cheawsamoot, TAT Deputy Governor for Marketing Communications, Ms. Thapanee Kiatphaiboon, TAT Deputy Governor for Domestic Market, and Mr. Kittipong Kittikachorn, General Manager of Suvarnabhumi Airport, and joined by representatives and figures from the Thai public and private sector.

Saudia is operating the direct service between Saudi Arabia and Thailand using a 298-seat Boeing 789 aircraft. For the winter programme, from 28 February to 25 March, the airline has scheduled to operate on the Riyadh-Bangkok route with three flights per week, every Monday, Wednesday, and Friday, with Flight 846 arrival time in Bangkok at 18.05 Hrs. and Flight 847 outbound departure at 20.35 Hrs.

For the summer programme, the service will be increased to seven flights per week and will also be expanded to Jeddah. From 27 March to 29 October, Flight SV 844/845 on the Jeddah-Bangkok-Jeddah route will be operated every Monday, Wednesday, Friday, and Sunday, with inbound arrival time in Bangkok at 16:55 Hrs. and outbound departure at 00:15 Hrs. of the next day.

Meanwhile, from 29 March to 30 October, Flight SV846/847 on Jeddah-Riyadh-Bangkok-Riyadh-Jeddah will be operated every Tuesday, Thursday and Saturday, with inbound arrival time in Bangkok at 16.55 Hrs. and outbound departure at 00.15 Hrs. of the next day.

H.E. Mr. Phiphat Ratchakitprakarn, Minister of Tourism and Sports, said, “Thailand is honoured to welcome Saudia’s direct services from Saudi Arabia. This direct flight between Riyadh and Bangkok will certainly pave the way for mutual tourism cooperation between the two countries. To this extent, TAT has been entrusted to explore opportunities to promote Thailand as a preferred destination for Saudis wanting to travel abroad.”