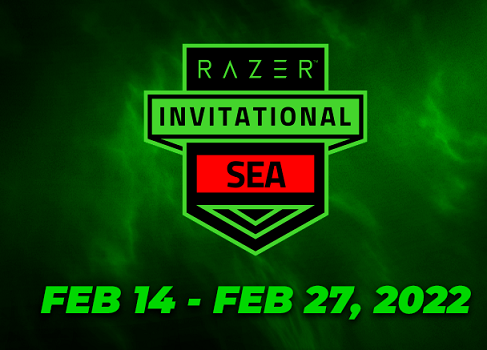 Razer™, the leading global lifestyle brand for gamers (Hong Kong Stock Code: 1337), is sounding the clarion call for esports athletes in Southeast Asia as Razer Invitational, the region’s most inclusive online esports tournament, is back and better than ever.

This year the tournament will be held across two main formats: the National Showdown which will feature national teams appointed by their respective esports federations, and the Open Category for gamers who wish to test their mettle on an international stage but are not affiliated to the federations. In addition, Razer is inviting experts, athletes, and industry leaders to participate in Masterclass Sessions hosted for the community to learn more about gaming, wellness, and the esports industry.

The Razer Invitational – SEA will be open to the entire Southeast Asian gaming community regardless of skill level and will feature the same titles that will be played in the 31st Southeast Asian Games – Mobile Legends: Bang Bang and PUBG Mobile. The tournament will start on February 14th and end on February 27th with prizes amounting to USD$30,000 up for grabs.

“The Razer Invitational has always been our commitment to offer inclusive gaming opportunities to the incredibly supportive Southeast Asian community, while preparing them for the SEA games,” says Flo Gutierrez, Director of Global Esports at Razer. “Staying true to that mission, this year we’re offering more gamers the potential to make a name for themselves on the world’s stage, while also giving them the support they need through the addition of master class sessions to hone their skills and engage in healthier gaming habits as part of our Champions Start from Within initiative.”

The first Razer Invitational – SEA garnered over 10.5 million live stream views and 67 million social impressions. This year audiences can expect a lot more to tune into as the Razer Invitational will be supported once again by Tier One Entertainment, one of the foremost gaming and esports talent agencies in Southeast Asia.

With an aim to ensure that the competition remains accessible to everyone in Southeast Asia, and to support athletes of different skill levels, the upcoming Razer Invitational – SEA will be held across two main formats – the National Showdown and the Open Category.

Sanctioned by the newly formed Southeast Asian Esports Federation (SEAEF), the National Showdown will feature the appointed national teams battling it out ahead of the upcoming 31st Southeast Asian Games slated to be held in Vietnam this May.

“We are honored that Razer’s vision and direction for the development of esports in Southeast Asia are very much aligned with SEAEF’s, and that Razer recognizes the growth and opportunity of esports in the region,” said Samart Benjamin Assarasakorn, Acting General Secretary of SEAEF. “SEAEF is proud to be sanctioning the Razer Invitational – SEA 2022 and will be sending the best esports athletes with the support of each SEAEF founding country member to participate in this event.”

To sign up for Razer Invitational – SEA, please visit Team Razer’s Facebook page. Together with Tier One Entertainment, Razer will be broadcasting the tournament, which can be viewed on the page as well.

Razer has historically championed esports in the region and was the Official Esports Partner at the 30th SEA Games in 2019. The brand has maintained its strong relationship with the region’s esports federations, working together to ensure the 31st SEA Games take place this year.

The inaugural Razer Invitational was held in Southeast Asia in 2020 amidst the COVID-19 crisis. The tournament has since then expanded globally to North America, Latin American, Europe and the Middle East.