7 Ways italki Will Change Your Next Trip 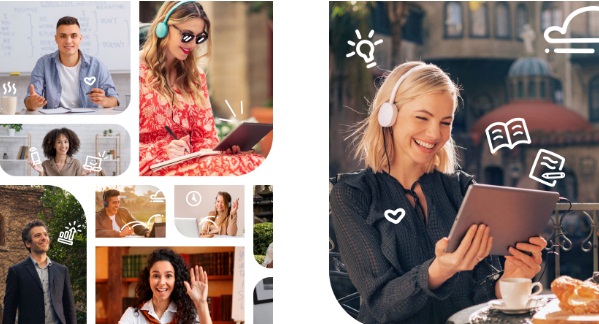 After more than a year of staying at home, travelers are setting out on bucket list trips and big adventures. So there couldn’t be a better time to learn a foreign language with italki, which is celebrating 14 years of connecting students with real-life teachers around the world. Here, we look at how learning a language with italki can enhance your travels — and your life.
1. There’s a human connection.
When italki was created 14 years ago, cofounder Kevin Chen says the mission was to foster human connections around the globe. “We launched italki as a social network for language exchange,” says Chen. “We wanted to help connect people around the world to teach each other online.” Today, italki has more than 20,000 high-quality teachers instructing millions of users in over 150 languages. Plus, it’s not just the well-known languages like Spanish and French: There’s a wide diversity of teachers giving instruction in regional languages like Basque, dialects such as Shanghainese, constructed languages (Esperanto), and even sign language. And with italki, you’re not simply reading out of a manual or watching a video, you’re actually conversing with another person, learning about their life and finding ways to connect on a deeper level.
2. You’ll have a better understanding of the place and the culture.
“When you learn a new language, you learn a new culture and you learn a new way of seeing the world. And I think that’s magical,” says Cindy Shak, an italki student who is working her way to becoming a polyglot. Shak already speaks French and English, and she is currently studying Spanish and Arabic. Indeed, there’s something about learning a foreign language that gives you a deeper understanding of a place. Instead of just seeing a country as a tourist and getting by, when you know another language, you’ll have a more heightened awareness of your surroundings and be able to understand nuances about the culture.
3. You’ll feel like a local.
“I like being able to take what I’ve learned and actually live it out in real life,” says Julia Kafozoff, a senior at the University of Pennsylvania who has been studying Spanish and Russian. “Ordering food, asking for directions, meeting people, starting up conversations, and learning things that wouldn’t have been translated to you otherwise.” When you speak another language, doors suddenly open in ways they haven’t before, and you’ll be able to understand when it’s like to live like a local.
4. You might even meet some locals.
The stories of how italki has connected people around the globe are endless. Teachers and students have met in person and become close friends (). Language journeys have also resulted in international jobs, like one user who got hired to translate at the Olympics. And of course, when you know a language, it’s so much easier to strike up conversations and make new friendships while you’re traveling.
5. You’ll eat better.
There’s that famous scene in the movie When Harry Met Sally when a diner at the next table says, “I’ll have what she’s having.” Unfortunately, that technique doesn’t always pay off when you’re in a foreign country, since you could easily order a dish that doesn’t suit your tastebuds. And asking for an English language menu can often be comical in other countries — and oftentimes ingredients are left off or translated incorrectly. Instead, imagine learning Mandarin with italki and showing up at a street food market in Shanghai and being able to order in the local dialect. Now you’re really eating.
6. You’ll have fewer problems while traveling.
Picture yourself getting lost while driving through a small town where no one knows how to speak English or finding yourself stranded while strolling through a city, not knowing which way to turn. That’s a reality when you’re traveling. When you know the local language, you’ll be able to easily ask for directions — a. When you learn a language with italki, you’re also learning idioms and slang, which will make it much easier to get by.
7. Your travel experience will be deeper and more meaningful.
A major benefit of knowing the language: You can skip the standard tourist spots with English menus and signs and visit the places where locals go and see things through their eyes and understand what truly makes a place tick. Ultimately, knowing another language will help you get off the beaten path and make amazing discoveries, turning what could have been just another vacation into a life-enhancing trip.
Learn more at www.italki.com and follow their social channels on Facebook, Twitter, Instagram, and YouTube.
Share
Facebook
Twitter
Pinterest
WhatsApp
Previous article
Homa Pioneers Community Vision In Phuket Town As It Partners With Local Street Artist “Kailand”
Next article
7+7 Phuket Sandbox Extension